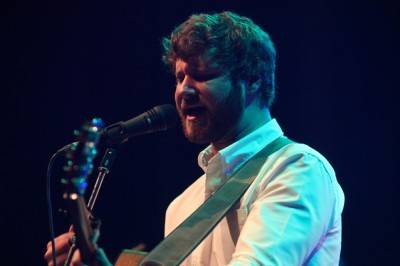 Dan Mangan has a lot to grin about these days. After three months on tour promoting his second record, Nice, Nice, Very Nice, he’s returned to his hometown of Vancouver, selling out both of his shows at the Vogue Theatre.

I was fortunate enough to attend the first of the two, and I couldn’t believe my luck as I stared at the line that wrapped around Ceili’s, a random pizza parlour, Starbucks and Staples (convenient for fans that needed a quick nosh, beer, and a 10-pack of manila folders). Followers of the good-natured songwriter just kept on piling up.

The kind and attentive staff successfully ushered mostly everyone inside by the time The Crackling finished their opening set. Fronted by Kenton Loewen, a jazz-trained drummer turned composer and singer, they turned many heads with their smoky and soothing folk-sound. 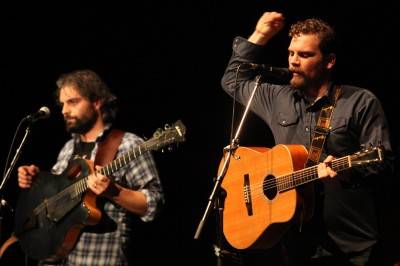 Next on the bill, The Burning Hell from Peterborough, Ontario had the audience in stitches with their acoustic comedy. In his three-piece suit, vocalist Matthias Kom rolled onto the stage with his microscopic ukulele, later upgrading to a miniature six-string.

Brimming over with quirkiness, the band performed a series of slapstick “story songs”, as Kom put it, filled with unexpected punchlines and a touch of klezmer. Their most memorable tune had to be the playful “It Happens in Florida”, the lyrics packed with Mitch Hedberg-like quips including “Love is like a trailer park. It’s ugly but functional”.Â  The Burning Hell holds a specialized and comfy nook in the contemporary folk movement.

Within minutes of Dan Mangan’s appearance, the giddy teens in the audience began inching towards the stage to get close to their idol, hoping security wouldn’t turn them away. Unfortunately the aisles were cleared, but the whole seated system went down the drain as soon as Mangan played the sprightly “Sold”, a standout from his latest release. 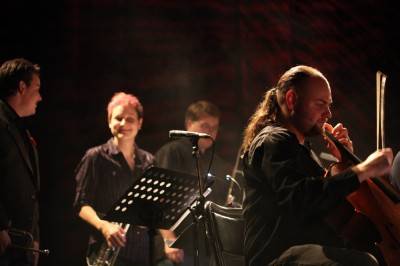 After all introductions were made, the humble artist took a moment to roll up the sleeves of his crisp, white shirt and enjoy his incredibly warm reception. Fully in his element, Mangan remarked “I feel like I have so many friends”. He maintained a close rapport with his 1,200 new pals for the rest of the night, often blushing from their compliments on his full beard.

He moved onto a few lovelorn numbers including “You Silly Git” and “Indie Queens are Waiting”, a duet featuring Veda Hille’s darling vocals. The entire crowd then joined Mangan in singing the chart-topping “Road Regrets” (mid-song, he justly thanked Cory Ashworth from The Peak for the frequent airplay). Supporting band members Gordon Grdina, John Walsh, Kenton Loewen, and Shaun Brodie joined Mangan on the frontline for “Tina’s Glorious Comeback”, a foot-stomper that possessed the five grown to do the dosey-doe, an amusing sight by any standards.

Being Remembrance Day (and the birthday of Kurt Vonnegut, Mangan’s literary hero), the band returned to a couple of solemn and reflective numbers like “Fair Verona” and “Basket”.Â  The latter showed Mangan moving from meek and controlled to flat-out indignant as he belted out “I’ll ride my steed all through this town ‘til I have looked and I have found your peaceful memory”.

Seeing Mangan live, the intricate details in the fabric of his music became far more apparent. His nimble guitar playing, bittersweet melodies, and the manner in which his words lie in the air then softly drop off, make him a unique artist under the huge umbrella of emerging songwriters. While this great talent seemed to pop up overnight, I guarantee he won’t be dropping off our radars anytime soon.

2 responses to “Dan Mangan at the Vogue Theatre”