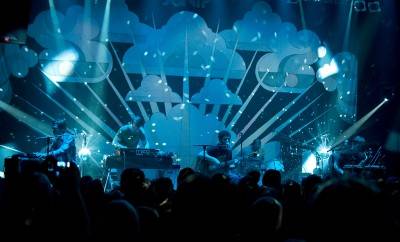 Whatever the reason, Sharon Van Etten‘s unique stage presence, somehow awkward and confident at the same time, succeeded in holding the audience’s attention. Even though the majority of the crowd had probably paid for their tickets to see JosÃ© GonzÃ¡lez‘s band, Junip, play Venue, van Etten easily held her own and proved she deserved her time on stage. 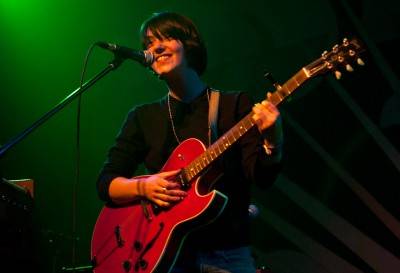 Not to be outdone, JosÃ© GonzÃ¡lez injected some of his own charm into the evening early. While Van Etten was performing at the harmonium, her mic was slowly slipping down the mic stand. With both hands on the harmonium, Van Etten was crouching, little my little, to keep up with the declining mic. Then GonzÃ¡lez saved the day, appearing from the front of stage to fix it for her, to which she smiled her charming smile. At the end of the song, she commented jokingly about her “roadie JosÃ© GonzÃ¡lez.”

After a short break and quick tuning session, the members of Junip (JosÃ© GonzÃ¡lez, Tobias Winterkorn, and Elias Araya, along with two additional musicians who tour with the band) took their places on stage.

Junip, which just released Fields, its only LP, could be criticized for building their reputation on GonzÃ¡lez’s established career. The immensely talented GonzÃ¡lez has received critical acclaim for his solo LP’s, as well as having songs featured on television, a video game, and (in my opinion) one of the greatest and most beautiful TVÂ ads ever, in which thousands of colourful rubber balls are unleashed onto San Francisco’s hilly cityscape. With this man fronting the band, it would be an utter shock for Junip to suck.

And although GonzÃ¡lez’s unique, gentle voice was as central to the evening as his soft bearded face, the members of Junip were out to prove they aren’t simply a “GonzÃ¡lez-and-friends” affair. They set a quick pace straight out of the gates, launching into “Rope and Summit” and “Sweet and Bitter” two driving, powerful tracks. Junip is not afraid of slowing it down, though, and did so from time to time. This was especially moving during the beautiful “Without You”.