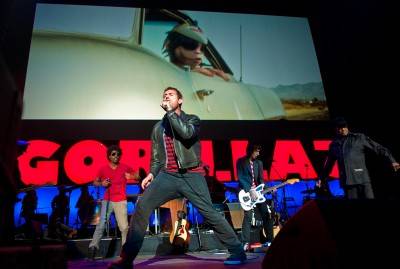 I’ve been waiting ages to see Gorillaz and was giddy when I got to Rogers Arena on Wednesday night. I got even more charged up when I saw the light and sound set-up before anyone got on stage.

The show started with the virtual bandleader and green monkey, Murdoc Niccals, addressing the audience on a massive screen atop the stage. And while he was doing so 25 people filed on so that when the lights and sound hit there was a full brass band, two drumkits, a four-person harmony section and a full string section greeting the audience. Snoop Dogg’s face took over the screen as Gorillaz opened with “Welcome to the World of the Plastic Beach”.

For some reason I thought the focus of the show would mostly be on the animated aspect of the band and I was geared up to watch a concert-length cartoon video. Not at all – it was such a captivating stage performance that I sometimes had to remind myself to look at the screen.

The concert, like the band, told a story. The second track’s accompanying video had front-man Damon Albarn and his Gorillaz co-creator and animator Jamie Hewlett as barely living people, perhaps the last two on Earth, to go with “The Last Living Souls” track from the second Gorillaz album, Demon Days

It picked up after that with audience fave “19-2000” from Gorillaz, the band’s debut album. The energy remained high, largely in part because Albarn seems to love having fun. It was the group’s last stop in the North American leg of their world tour, and they’ve been playing almost nightly across the U.S and Canada since they started on Oct 3 in Montreal. The sense of relief, the promise of a week holiday before they start again in Europe and the obvious bond of a group that’s enjoyed each other’s company translated into carefree fun and washed over the audience.

Then Bobbie Womack came out and performed “Stylo” with The Pharcyde’s Bootie Brown, who appeared on the Demon Days hit “Dirty Harry”, which they performed later on in the show. Other guest appearances included De La Soul (yes!) for “Superfast Jellyfish” and Little Dragon to help out with the Plastic Beach collaborations “Empire Ants” and “To Binge”. (Sidenote: Little Dragon’s front woman Yukimi Nagano clearly had a sweet rapport with Albarn and got a big hug from him during the show. I thought: she must feel like the luckiest girl in the world right now.)

There were a lot of highlights. “On Melancholy Hill” is, ironically, always a joy to listen to; “El Manana” is a personal fave and was awesome; there was a huge drum duet for “Glitter Freeze”; Albarn jumped around with some Blur signature moves during “Punk”; and the encore was long and super joyful and included Gorillaz classics “Feel Good Inc.” and “Clint Eastwood”.

The most brilliant thing about the band is that Albarn’s created a whole universe to get lost in with his lone brand of surreal pop. It is as fantastic as he envisions it to be, such is the genius of inventing a futuristic animated monkey band. The live show is on par with the special and unique idea of Gorillaz and is a delightful rarity to see.

One response to “Gorillaz at Rogers Arena”