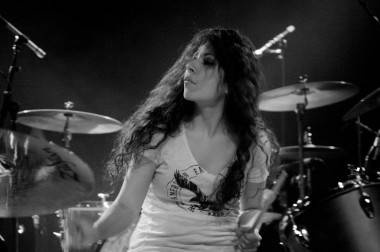 Magneta Lane opening for Sloan at the Commodore Ballroom, Dec 15 2009

Sometimes I think all I need is a micro-Korg, a microphone, and some liquid courage, and I too could be a rock star. Throw in a makeshift stage made from my IKEA owl bed sheets and those extra Christmas lights in the basement and I’m all set.

Apparently, Vancouver indie act Fine Mist had the exact same idea. As the duo hit the stage with their glasses of Chardonnay in tow, unsuspecting audience members may have felt like they had intruded on an intimate cocktail party where the hosts had decided to regale their friends with a few of their favorite tunes.

Fine Mist’s sound, which consists of composer Jay Arner’s pre-recorded synth-pop tracks and Megan McDonald’s vocals, challenges most people’s ideas of the conventions of live performance. Without the fuss of a drumkit and guitars, the pair seemed comfortable and content making conversation with the audience and occasionally inviting their friends onstage to join them in a song. It doesn’t hurt when your friends are the members of Sloan, the headliner, either.

I’ve tried to avoid likening their theatrics to a karaoke performance, but the comparison cannot be avoided, especially as McDonald passed on her microphone to the audience to join her repeatedly scream “murder” in their track of the same title. At this point, their set felt like the tail end of a drunken holiday office party.

Few bands could get away with Fine Mist’s laissez-faire and minimalist approach, but McDonald and Arner capture the energy of catchy ’80s electronic pop, in all its kitschy glory, enough to keep listeners baffled and entertained. And McDonald’s voice, belting out the lyrics, “Why can’t we meet in the middle?” during the bridge of the set’s opening track, “Because it’s the Ocean”, is still stuck in my head.

When Magneta Lane strolled onto the stage, Nadia King immediately became the focal point. Hiding behind her long curly tresses, King’s bass-heavy drumming jump-started the band’s gritty garage sound, which has been complemented on this tour by Katerina Theodorelos from Toronto band Lipstick Machine on bass. 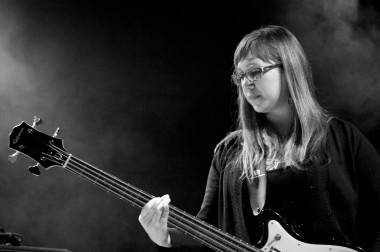 Aggressive yet soothing, Lexi Valentine’s vocals hearken back to the likes of Annabella Lwin of Bow Wow Wow mixed with the tone of current throwback singers such as Zooey Deschanel. The juxtaposition of different styles and eras seems to be a recurring theme with the Toronto (by way of North York) band.

The members’ stylish and youthful attitude would be just as appropriate on the cover of Nylon magazine as it would be on the walls of CBGB’s in its heyday. Tracks such as “Bloody French” and “House of Mirrors” off the latest Magneta Lane record, Gambling with God, reflect the band’s fluidity through space and time.

However, there was an apparent lack of cohesion between the distinct personalities of each band member. This is understandable considering that one third of the group’s regular line up, bassist French, had to sit out of their whirlwind tour to commit her time to her studies. Consequently, the band lacked the presence of more veteran bands such as Sloan, which Magneta Lane had been supporting for the past month. But time is on their side.