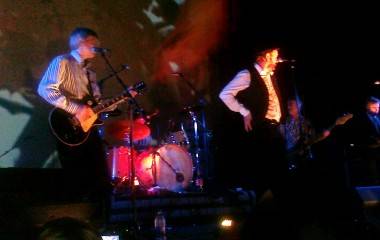 Acknowledging the rather lengthy interludes between songs, Pointed Sticks vocalist Nick Jones noted how the band once prided itself on being able to blast through their set in blocks of four interlude-less songs at time. “We were an awesome rock machine,” said Jones. “And now we’re one step away from the wheelchair.” Well, not quite.

Pretty Vanilla opened the first of the 30-year-old band’s two Dec. 19 hometown shows, both with entirely different opening acts (the evening’s featured the Strange Magic and the TVees). The all-ages afternoon show gave characters from the city’s first-wave punk scene, now all growed-up, the chance to bring (and chase) their toddlers, some half-hidden by soundproof headphones.

The Vancouver power-pop trio’s energy inspired some early birds, toddlers and up, onto the floor space in front of the high-rise stage, while its mix of candy-laced hooks and swinging rhythms – reminiscent of early Descendents mixed with the Scissor Sisters – had the rest of us comfortably bopping our heads in our seats.

If the makers of Ritalin decided to break into the music business, their first clients would undoubtedly be the Evaporators. Fronted by the ball of energy otherwise known as Nardwuar, the long-running Vancouver band’s opening song, “I Want Some Candy”, immediately threw the audience into a frantic sugar rush. Decked head to toe in a pleather, maple-leafed jumpsuit, Nardwuar and guitarist David Carswell, bassist Stephen Hamm and drummer Shawn Mrazek, similarly dressed in red-and-white tunics, performed a barrage of quirky Canadiana punk in the vein of The Aquabats, also known for turning brain farts into catchy anthems.

As the Evaporators rock machine delved into its odes to butter knives and plastic propellers, Nardwuar took audience interaction to another level by recruiting members to hoist him up on their shoulders before proceeding into a skanking party in the aisles. The impromptu dance explosion continued with my personal favorite “You Got Me Into This Now”, which strongly resembled the rockabilly flavour of Rocky Horror Picture Show’s “Time Warp”.

“Addicted to Cheese”, a slap to the face for the unfortunate lactose intolerant population of the world, also signaled the Nard’s first costume change. Now festooned in a winter jumper and a motorcycle helmet, the enigmatic singer resembled a skydiver, floating on top of his fans whilst playing the main riff on his keyboard, also held up by eager participants.

In between the animal-house madness, the Evaporators also took it upon themselves to educate the young’uns on Canadian history with song tales like “Gassy Jack” and “Ripple Rock” in the style of an old miner’s singalong. The communal aura continued as each band member broke into a dance solo in their closing song, “I Don’t Need My Friends to Tell Me Who My Friends Are” and Nardwuar convinced those in front to crouch down and, at his command, leap into the air. The band then took a well deserved stage bow for possibly the most action-packed and enjoyable performance that I have ever witnessed.

As the Pointed Sticks began setting up their instruments to the sounds of the Isley Brothers and the Marcels, the Canadian rock veterans could easily have been confused for members of your local Rotary Club.

Kicking off their set with “She’s Not Alone Anymore”, a track off the first record of new Pointed Sticks material in nearly (gulp!) 30 years, the band produced an almost nervous air at what was essentially its first show in a year-and-a-half. But as Jones and his co-horts eased into romantic classics such as “By Your Side”, one of guitarist Bill Napier-Hemy‘s tunes, and “When She’s Alone”, the youthful passion and pure enjoyment was apparent in the faces of Jones and Gord Nicholl, whoseÂ  keyboards give the songs their ’80s new-wave kick. And, considering some in the audience were teenagers there to see their teacher Napier-Hemy shred on guitar, it was both slightly incongruous and also weirdly apt to hear Jones croon lyrics like, “Anytime you’re around I feel good/Every time you’re gone I feel blue.”

The naivete of a few of their older songs was in counterpoint to Jones’ anecdotes. The singer, who now makes his home in Comox on Vancouver Island, recalled the bad old days of band practices and welfare, and the time he went to collect his check from an office worker reading a newspaper story (complete with picture) anointing the Pointed Sticks as “the Next Big Thing.” Needless to say, he walked away empty-handed.

The Sticks began their encore with their playful composition “A Power Pop Santa” and ended with the more sinister sounding and aptly named tune, “The Witch”, which showcased Johnny Fereira on sax. Thought admittedly not the well-oiled rock machine of years past – at least, not at this mid-day set – the Pointed Sticks made up for the rough spots with its acceptance of its evolution through musical time and space, and by graciously passing the torch to younger bands such as Pretty Vanilla. Drummer Ian Tiles, while endeavouring to keep his bandmates on track, even proudly wore the opening trio’s signature T-shirt.

One response to “Pointed Sticks at the Rio Theatre”