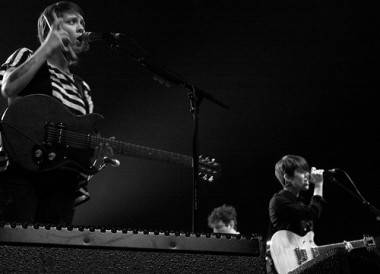 It’s not often that you walk out of a show scheming about ways that you can meet the band in order to become friends. But that’s what happened last night after Tegan and Sara’s set was over at Jingle Bell Rock, the joint holiday show with Jets Overhead and AFI at Victoria’s Save on Foods Memorial Arena.

Before Tegan and Sara took the stage, Jets Overhead played a quick half-an-hour set. Starting off slowly, the hometown band picked things up with its second song “No Nations” (the title track from their newest record). A last minute start-time change (apparently so that Tegan and Sara could play a longer set) meant that a large chunk of the audience trickled in at 8:00, while the band was already halfway through their set.

Whether it was because the other bands’ instruments were taking up space on the stage or this is the way that Jets OverheadÂ like to do things, there was no moving about on the stage, aside from vocalist/guitarist Adam Kittredge. The five band members were very spread out across the stage as well, making it hard to connect with one another.

The group, who are “very enthusiastically Victorian” as vocalist/keyboardist Antonia Freybe-Smith told the audience, seemed to have many people from their local following in the audience, cheering and whooping at any mention of the city. Overall, they sounded good, but the lack of stage presence and minimal connection with the audience made the live show boring.

Thought not promoted as such, the show was the first concert Tegan and Sara have played since the release of their new album Sainthood. Consequently, most of the songs from the set were from that record, although they did play old favourites “Walking With a Ghost” and closed with “Back in Your Head”.

The banter between songs was both gracious and funny, with at least two heartfelt “thank yous” to the audience for cheering, as well as stories (such as how they only received Christmas gifts they “needed” when they were growing up – like luggage at age 10). After asking who had downloaded Sainthood for free online and receiving some cheers, one of the Quins (I was too far back to tell who was who) said, “That’s awesome. I take stuff when I go to stores all the time.”

Trying to tie in the fact that it was the holiday season, some of the set was backlit by green and red lights, and the ladies, who took turns on keyboards and guitar, tried to get their keyboardist to play “Jingle Bells” (which failed).

After playing a couple of slower songs, Tegan (or perhaps Sara) commented that they were hardly preparing the audience for the festive season: “It’s like, ‘Merry Christmas, we’re getting a divorce,’”Â she commented. All three of Tegan and Sara’s bandmates were introduced as being from Victoria as well, which no doubt brought out more of the hometown crowd.

It seemed many people were wondering why AFI, a California punk rock act, was put on the same bill as two pop-rock Canadian bands. As it turns out, AFI’s bassist Hunter Burgan is not only good friends with Tegan and Sara, but he came out to play with them on a couple of songs, including the band’s newest single, “Hell”, which he co-wrote. The set was impressive, with Tegan and Sara sounding just as good, if not better live than on the record. And the witty comments between songs were an added bonus.

More Tegan and Sara at Save On Food Memorial Arena photos:

Jets OverheadÂ at Save On Food Memorial Arena photos:

5 responses to “Tegan and Sara at Save On Foods Memorial Arena, Victoria”