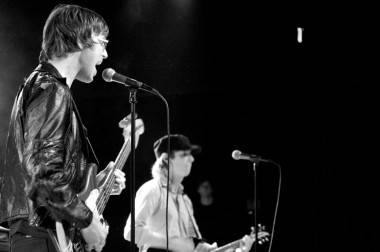 A quick and cold tour to promote their latest EP “Hit and Run” wrapped at Vancouver’s legendary (and fantastically festive) Commodore Ballroom last night. The venue is a favorite of both fans and bands, as this Tweet fromÂ @sloanmusic can attest.

After some back-and-forth texting, Jay (sweetheart that he is) Â managed to meet us upstairs to greet me and the Superfan and engage in some delightful conversation, which included discussing inaccuracies on his Wikipedia pages (let it be known that contrary to popular belief, Jay does not, in fact, like shrimp).

We talked a bit about the tour and the insanely cold temperatures encountered along the way. I learned that Sloan is both pragmatic and creative when it comes to dealing with the mechanical failures (quite possibly temperature-related) of their tour bus bathroom–beware of touring Canada in winter, all-girl bands. Oh, the glamour…

A memorable night indeed and great to see the members of Sloan all playing and getting along so well, despite any potential backstage tension associated with Chart Attack‘sÂ inclusion of all four members’ in their annual readers’ poll for the “Throw Your Underwear Award for Sexiest Canadian Male” (currently, Murphy is at the top of Sloan’s panty-pile). Surely, any competitive angst these veteran Canadian rockers may be dealing with is mitigated by “Sloan’s Grey Hair” being ranked so highly in the “Sweet Happenings in Music This Year” category.