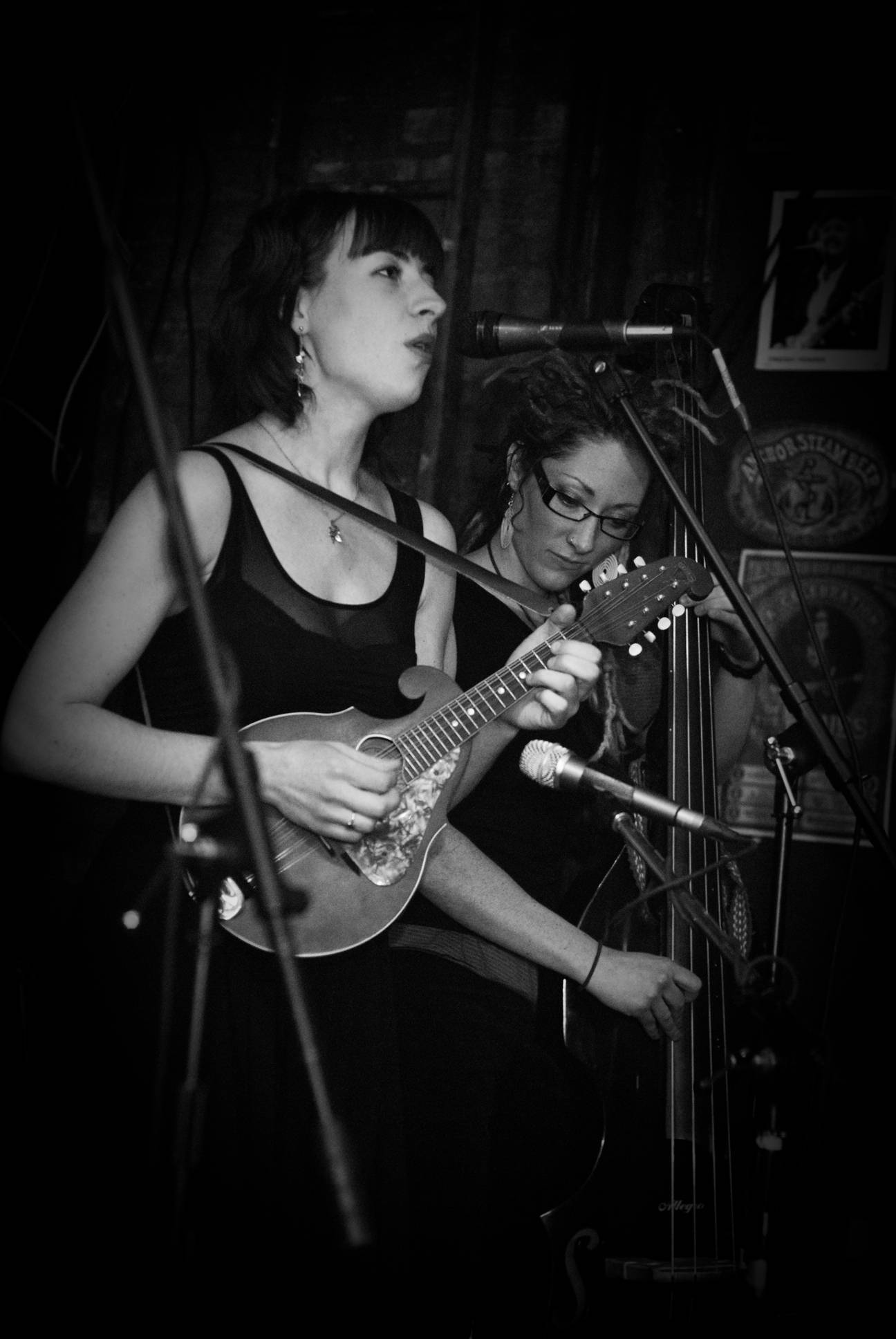 Kuzina and Marie-Josee Dandeneau with Oh My Darling.

the weekend that was in winnipeg. the deep freeze arriveth. minus 30
windchills.

and music to warm up our collective winnipeg music scene souls. to keep.

at the times changed high and lonesome. friday night. what was
originally scheduled to be an EP release show for Oh My Darling, became
instead a fundraising event. elusive finishing funds. so the place was
packed solid, no room to dance. i had to groove and skinny/shimmy around
the constant in and out flow of smokers feeding their addictions in the
minus 30 stuff outdoors. brrrrrrrrrrrr. close the door behind you!

opening, the wonderful magnificent sevens, who are always a magnificent 6
playing live. this time though, a break/up, ingrid gatin one of two
beautiful femmes in the band has left to pursue soloist aspirations. why
does this happen? they just released a wonderful cd, called dirty roads.
find it. love it. breathe it. recorded during several live shows, with a
few studio touches. the recording captures their live spirit. their
movement and passions. their joy that feeds the youngsters who actually
dance during their performances. i’m not the only one dancing! that’s
very unusual. and speaks to the quality of the mag 7s.

and then, someone leaves. losing ingrid’s voice, especially her voice,
oh and her mandolin playing, a big, deep hole.

they all get along. for her first solo show, saturday at the rudolf
rocker, her ex band/mates showed up, helped her.

and she’s gone. why!

oh my darling, four women, rootsy/bluegrass, three voices. i love them,
i Love dancing to their music. rosalyn on fiddle and alison on banjo
host the new roots jam monday nights at the Lo Pub. the very first one,
monday the 7th, began later than advertised. was packed. over a hundred
on a monday eve. alison tells me, monday the 21st, jordan of The Duhks
will join the jam band.

from the times. it’s over to the Cavern in The Village. The Afterbeat. I
Love Ska. grew up dancing on the first waves of it, specials, english
beat, madness. and here’s another break/up. dylan the drummer is gone.
an incredible drummer. his super/fast/tem(flow)po and the variance of
it. the new guy, he’s just a little slow. so the brilliant trumpet and
trombone arrangements aside, the new Afterbeat are a smidgen too slow.
more practice? who knows. i danced the hour. i gave it all. me and the
skinheads. gotta thing goin’ on. love taps aside from one skinhead, and
every time i wasn’t looking, POP! on my chest.

dylan’s now pounding for the punk band no more heroes (ah, a stranglers
song, must check these guys out. oh and if you don’t know rattus
norvegicus that first stranglers album, go/find/discover.)(and dance).

saturday. all about the albert and old punks. forbidden dimension. they
began in 1988. my buddy patrick devoted most of his midnight to 6 show
on ckuw to them. on his imploring appealings, i went and yeah i danced.
from the first song to the last encores, 100 minutes non/stop dancing
(The Jam).

after their set, before the encore, the drummer in his black mask,
walked over, held out his hand, “thanks for keeping me going.” why did
he need me? answer, the smoke machine! what the. by the third song, the
drummer leans into the mike, “cut the smoke man!” i’m surprised he
didn’t drop. black mask, thick smoke, hard pounding. bad combo. i could
barely see his drums, from five feet away. i key on drummers,
that’swhere i find the beat. it’s the motion of the sticks striking,
lightnin/fast on cymbals/snares that my movements
derive/arrive/thrive/.on. then i’m gone daddy gone, all violent femmes
dancing.

oh yeah, the utah phillips tribute at the mondragon. if you’re ever in
wpg and need great veggie food, go to the mondragon. i love their
cookies! save room for the cookies! seriously! i mean it man. and
Toronto’s flash lightnin at the times on saturday. those had nothing to
do with break/ups. utah/everything to do with workers solidarity and
anarchist dreams of utopia, flash l, hard/driving rhythm and blues.

upcoming…rusty of the waking eyes, “we’re having our cd release show
at the pyramid saturday december 20th.” i’ve been told i must dance. as
if that was even a doubt. so, let’s see, the details want me dancing in
a music video and on friday night, TJ asked if i would dance in a video.
first come/first swerve. you gotta swerve somebody. my soul’s soles is
all about the bands. feeding the energy machinery.

the CYRK thursday night. the undesirables doing their songs at this david
lynchian private home…