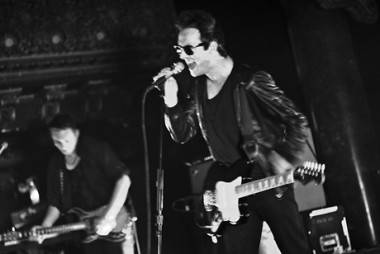 Let me save you the trouble – there isn’t. If you dig blinding lights, indecipherable lyrics and arena-style rock, you’re not alone I do, to- o. I don’t, however, like those things when they’re a put-on. Glasvegas could be great, but instead it’s just boring. It’s one thing to deliver up the rock clichÃ©s, but the band looked silly sweating through their leather jackets in the overheated club and the epileptic lights were unnecessary. A friend of a friend even made out with lead singer James Allen in the tour bus. Ooh, they have groupies, they MUST be legit! You get the impression these guys heard they were going to be big so they leafed through the rock ‘n’ roll handbook and got down to business.