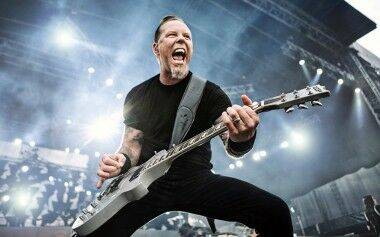 Metallica has been using the original Morricone track as the intro music for its concerts since the early 80’s, and Tuesday night at GM Place was no exception. Metallica’s career-long embrace of the Morricone recording may speak to the band’s self-awareness–in the film, the track is played over a graveyard scene, with Tuco scouring the site for the grave that holds $200,000 in gold coins.

Death and richesÂ -Â that’s it right there – maybe if the bandÂ amasses enough wealth, they can hide from misery behind a wall of craptastic goods. The Some Kind of Monster documentary is an embarrassing testament to niggling criticism and petty jealousies – the Metallica guys aren’t busting their asses working manual labour jobs, but they’re still up to their eyeballs in the shit–it’s just that this time it’s their own, personal shit.