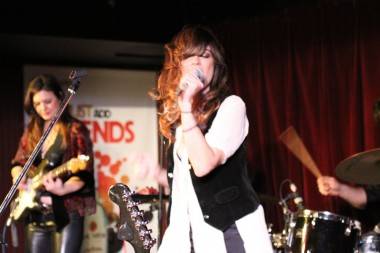 Review and photos–Nicole Atkins and the Black Sea at the Media Club, Vancouver, Feb 11 2011

– review and photos by Shawn Conner

“We’re thinking of calling this tour the Benicio del Tour-o,” Nicole Atkins mentioned during her set last night. “Kind of corny but kind of cool too, no?”

With a soul-belter’s voice and swagger and love songs about the devil, cryin’ and lyin’, Atkins does sometimes toe the line between corny and cool – but she rarely falters. At last night’s Vancouver show, the first of a tour in support of her long-awaited (by this reviewer, at least) second album Mondo Amore, Atkins’ big voice filled the tiny room with hurricane force. The joint wasn’t packed, exactly, but it was full enough, with at least a few recent converts who’d seen her open last year for The Black Keys at the Orpheum Theatre.

Lyrically, Atkins’ songs aren’t particularly deep, but she takes primal themes and turns them into devastating testimonials; near the end of the set, “The Tower”, off the new album, grew from a nondescript shack into a huge, ready-to-crumble edifice. For the person who’d requested Led Zeppelin’s “When the Levee Breaks”, this was a fitting response. 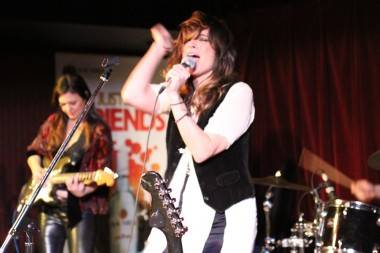 Nicole Atkins and the Black Sea at the Media Club, Vancouver, Feb 11 2011

Some songs off Mondo Amore, including “My Baby Don’t Lie” and “Cry Cry Cry”, use cliched rhyme schemes but Atkins delivers them with such conviction (and the melodies are so strong) that she gets away with it. The blues-rock inflections on the new album suit Atkins’ voice as much as the baroque pop arrangements of her debut Neptune City, but allow backing band the Black Sea leeway to cut loose on songs like “You Come to Me” and the deadly, stirring album opener “Vultures”. “My Baby Don’t Lie” let Irina Yalkowsky show off some nice slide guitar riffs; the rave-up “You Come to Me” gave drummer Ezra Oklan a chance to pound the hell out of his kit. 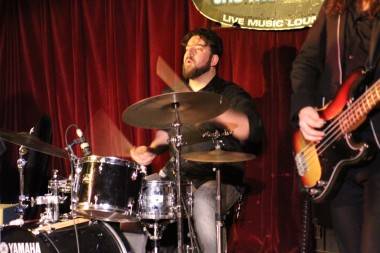 Ezra Oklan with Nicole Atkins and the Black Sea at the Media Club, Vancouver, Feb 11 2011

Mention should also be made of Atkins’ vocals on the noir-ish “Hotel Plaster”, which sold the tune in a away that the recorded Mondo Amore version doesn’t quite achieve, and a massively rocking “This Is for Love”. This segued into a solo acoustic version of “Monterey Honey”, a lovely song by ’90s Austin band Cotton Mathers. And the a capella beginning of “Neptune City”, the title track off her debut, was also quite sweet.

Like the headliner, opener Cotton Jones was a little corny, and kind of cool. From Maryland, the band has a Wilco-meets-’70s-California-soft-rock sound; they added to the feeling that, just by being there, we had stumbled across the place to be, at least on this particular night. 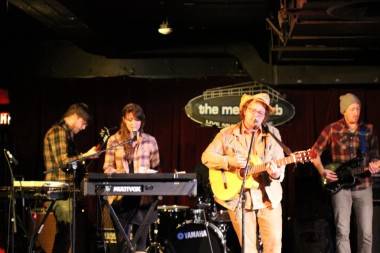 One response to “Nicole Atkins at the Media Club”