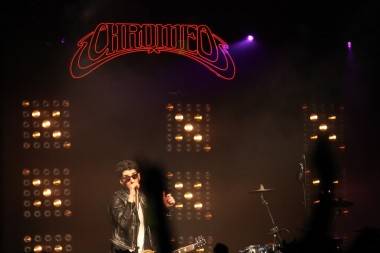 Review and photos – ChromeoÂ at the Commodore Ballroom, Vancouver, Feb 10 2011

When I was living in Montreal in the early 2000’s, I heard murmurs here and there about a local duo named Chromeo that was cranking out contagious tunes from a Pentium 2 computer and “antique” synthesizers. Little did I know that this partnership between childhood friends P-Thug (Patrick Gemayel) and Dave 1 (David Macklovitch) would become one of the most sought-after bands in the electronic scene. Being at their show last night felt like being invited into the hottest party of the awards season; the Commodore was packed, the Gen-Y crowd was downing highball after highball, and it was clear that they were ready to dance (or in most cases, fist-pump) the night away.

At 9 on the dot, the all-female line up of The Suzan got the audience going with a handful of tropical-punk songs from their debut LP Golden Week for the Poco Poco Beat (produced by Bjorn Yttling of Peter Bjorn and John). Hailing from Tokyo, the Harajuku influence was apparent in their fashion sense.Â  Each member was dressed in some sort of neon-patterned get-up, alluding to the vibrant and lighthearted direction of the band. 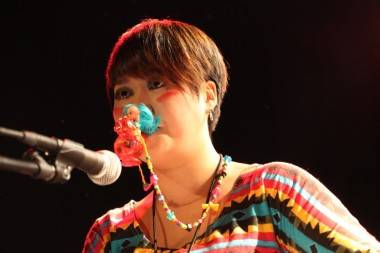 The Suzan at the Commodore Ballroom Feb 10 2011. Skot Nelson photo

Their intro was slightly shaky; vocalist Saori couldn’t seem to find a comfortable spot in her falsetto or chest voice and the instrumentation felt somewhat bland. But they definitely redeemed themselves with their energetic numbers, “Home” and “High and Low”. Evoking the eclecticism of groups like Edward Sharpe and the Magnetic Zeros with the bad-ass attitude of Japanese punk predecessors Hi Standard, they are a fresh and unique addition to the indie-rock scene.

MNDR, aka Amanda Warner, followed shortly after with a slightly less original set. Don’t get me wrong, the hip-hop starlet commanded every inch of the stage while a strobe projector slide show fragmented her fluid dance moves, making for one trippy and impressive sight. She also gallantly protected one of her fans who was being scolded by security for stealing a snapshot in the venue. Plus, she’s proud of her Canadian roots (the NYC-based artist was excited to tell the audience about her family in Winnipeg). 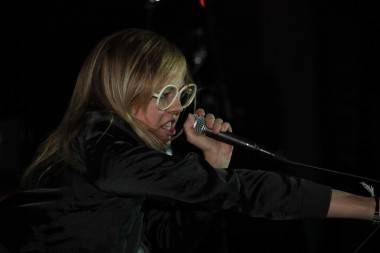 The girl’s got some charm and slick dance moves in her back pocket, but musically, she was drowning in her own beats. She sounded like she was screaming through “Sooner or Later”, trying to compete with the monotonous techno riffs. I’m sorry to say, it wasn’t the standout performance I expected to see that night.

Chromeo, on the other hand, put on one polished, animated and fun-filled show. Dave 1 and P-Thug were lured onto the stage with a “Chromeo-oh” chant from the audience, mimicking the Winkie prison guards from the Wizard of Oz. More flashbacks of my childhood hit me as they sang “Don’t Turn the Lights On”, a prime example of the kitschy, 80s sound they’ve revived on their latest record, Business Casual. 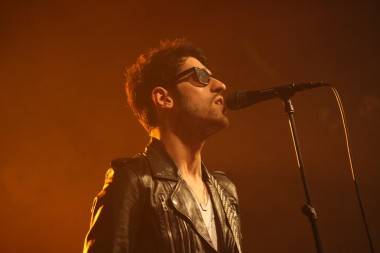 I could see why the band is often compared to Hall and Oates but, in his black leather jacket, curly coif, and wayfarers, Dave 1 channeled more of a Prince vibe. In fact, their song “Outta Sight” could be mistaken for a hidden track on The Artist’s 1981 album Controversy. Crooning bluesy runs through a talk-box, P-Thug felt like a member of ’90s R&B groups like Blackstreet or New Edition. But this is exactly what Chromeo does best. They’ve taken the best elements of their childhood pop and moulded them into a nostalgic but fresh sound.

More pop culture allusions came later in the night. The synth intro to “Waiting for You” (which sounded very close to the Doogie Howser theme song) led into some old school rapping from Dave-1. “Bonafide Lovin” offered Santana-esque guitar solos to a bumping house track. The show ended with a release of confetti from ceiling traps, like the end of a Brat Pack film. After all the jumping I did on the dance floor I was spent, but most fans looked like they wanted to stay ’til sunrise. Luckily for them, Chromeo will be doing a second show tonight, Feb 11, at the Commodore. Everyone ready for Round 2?