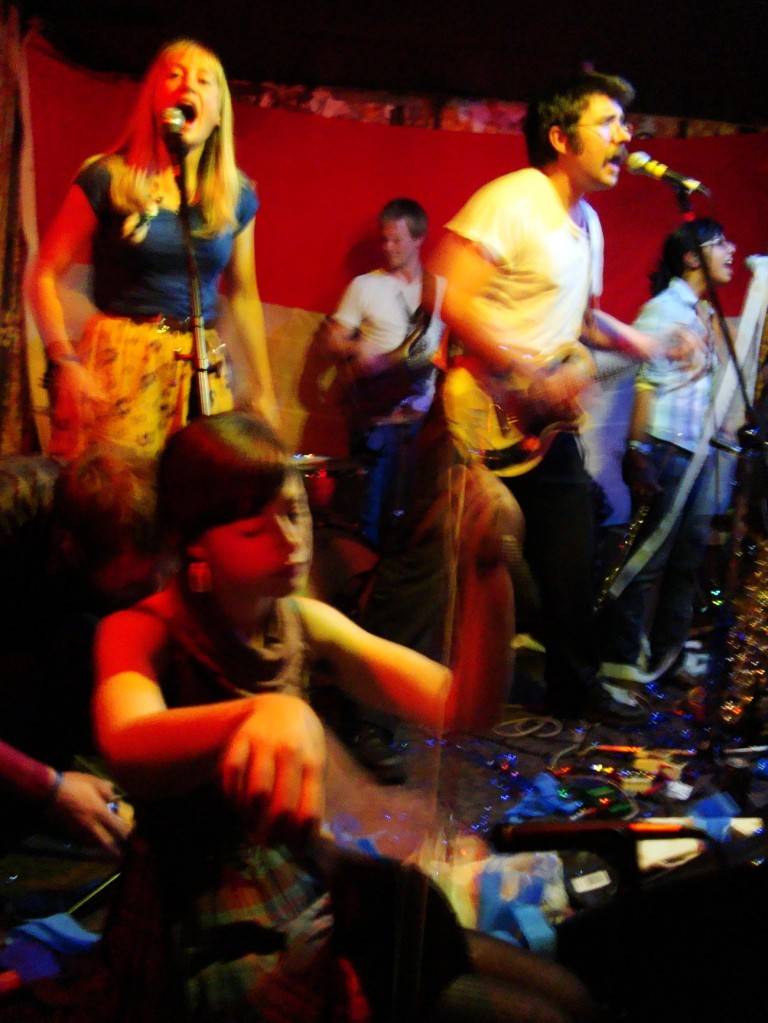 There were plenty of great shows going on around Halifax on Friday – Final Fantasy playing with Symphony Nova Scotia at Dalhousie, MSTRKRFT at the New Palace, Two Hours Traffic at the Coconut Grove – but when you’re a transplanted Vancouverite and friend-of-a-friend Vancouver boy Dan Mangan is playing at the Company House, the choice really isn’t that hard to make. Well, there were a few ticket/pass misunderstandings along the way that also contributed to that decision, but I’m glad I ended up where I did.

The small bar on Gottingen was packed when we arrived around 9:30, just in time to catch the end of The Eddie Orso Band’s set. From what I could see, The Eddie Orso Band consisted of Torontonian Eddie Orso and his guitar, but maybe we missed the full band set up. Orso played heartfelt roots tunes (his final song written about a friend with brain cancer), but the Company House chatter was too loud to hear most of his lyrics. I didn’t hear much to distinguish him from any other singer/songwriter at an open mic night, but that wasn’t really his fault.

Mangan took the stage to impressive applause, especially considering that this was his first trip to Halifax.  There was a sizable Vancouver contingent parked right in front of the stage who knew all the words to every song, but they weren’t alone; Mangan’s success on CBC Radio has surely contributed to his cross-Canada popularity.

I’d seen Mangan perform before, years ago, and his act has improved immeasurably. His songs remind you of a less-histrionic Damien Rice, though tinged with wry confessional asides and flashes of humor. I was prepared to clap politely, but found myself won over by the end of the set.

Mangan was just recovering from a bout with the flu (“Probably swine flu, I don’t know”) in PEI, and somehow, even his mid-song coughs earned cheers from the adoring audience. Should I mention that the crowd was mostly female, and that Mangan’s offhand remark about his girlfriend in Vancouver earned a few mock-outraged outbursts?

Mangan closed (or tried to close) with a rousing singalong to “Robots” (chorus: “Robots need love too/They want to be loved by you”), jumping on a nearby table to finish the song, but the crowd refused to let him and his band leave the stage. Without much prompting by the Vancouver crew, the entire audience was soon serenading Mangan and his band with a reprise of “Robots.” It was crazy, people!

After that folky good time, we headed north to get wild with the First Aid Kit at Gus’ Pub. The Halifax band crafts indie-dance that’s practically sunshine in a bottle – if you can hear “New York City” and remain still, you’re probably just a big jerk. Vocalist Conor Hancey danced like a maniac onstage, and came dangerously close to punching a hole in Gus’ ceiling, but all in the name of a sweaty good time.

Around midnight, Entire Cities clambered onstage and showed how an eight-man band (give or take a few) that plays “experimental country” can tear down an entire venue. It’s known for their explosive live shows, but I wasn’t prepared for the confetti, streamers, and general mayhem that ensued. Singer Simon Borer looks a bit like a band teacher gone wild, leading his motley crew of kids as far astray as they’ll let him. Guitars, drums, banjo, flute, saxophone, bass, singing saw… yep, they used just about every instrument you can think of, and some you can’t, to craft the kind of raucous good time that simply can’t be captured on recordings.

One response to “Halifax Pop Explosion 2009”