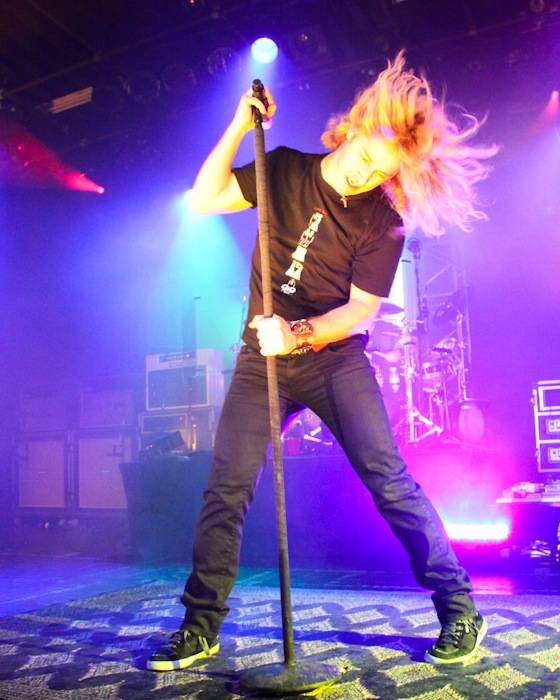 Collective Soul did not play “Smashing Young Man”. Disappointing, but in a way, it wouldn’t have fit – maybe “Smashed Young Men” would be more appropriate.

There were plenty of those at the sold-out Commodore show. Plenty of smashed young (and not-so-young) ladies too, pushing their way to the stage, beer-in-hand, boyfriend in tow. I’ve seen a gazillion shows at the Commodore. This one may get the award for the most drunken people singing to the most songs.

The l’il band from Stockbridge, Georgia, that made it big in the mid-nineties began with “Welcome All Again”, a song off their new and eighth studio album (self-titled, though also curiously known as Rabbit). From the get-go, people were gone, singing to the new single while pot smoke clouded the air. Seems fans are rabid for Rabbit.

Lead singer/songwriter Ed Roland did his best to stoke the smoke, stomping around the stage, waving and shaking his hands in the air like some long-haired preacher with epilepsy. Guitarist brother Dean Roland was a tad more reserved, looking almost pensive with a slight smile that didn’t break out into a genuine grin until the opening riff for “December”. Collective Soul continued with songs from multi-platinum albums Collective Soul (1995), Disciplined Breakdown (1997) and Dosage (1999).

If the response for these songs was strong, the response for the biggest Collective Soul hit “Shine” verged on the ridiculous. The crowd was into it before. Now they were not only into it – they were it. People sang the song as if it was their own. The band milked it like a cash cow, adding an acoustic section and (yes) a singalong to what was already basically a singalong.

You’ve played your biggest hit. Now what do you do?

Tease the crowd with AC/DC, that’s what. A smirking Joel Kosche played “Thunderstruck” just long enough for the crowd to get into it. Then came “Dirty Deeds Done Dirt Cheap” and “Back in Black”. Singing was replaced by fists waving in the air, and way too much air guitar. And, of course, once the songs settled in, the band cut out. Some AC/DC fans were angry: “Don’t stop! Keep going!”

Collective Soul did keep going, but (sadly for some) with their own material: “Hollywood” followed by “Better Now”. Then they returned for a four-song encore. The momentum of the entire show was almost lost when, after a rocking “Dig”, Roland headed to keyboard to play an el lame-o supreme-o song. “This is called ‘Staring Down’ ,” he said as he stared down at the keyboard and waited for the tech guys to adjust the sound. Solemn and earnest for the Rabbit‘s first single, Roland played it like a kid at a piano recital and the response was the same.

There was a sigh of collective relief when it was followed by a rocking “Where the River Flows”. But schmaltz returned in the form of “Run”, a sappy song from Dosage. The crowd sang along as if to compensate. And the band made a big deal of leaving the stage slowly, as people kept singing the song. What a lame shame. It could have been a smashing ending.