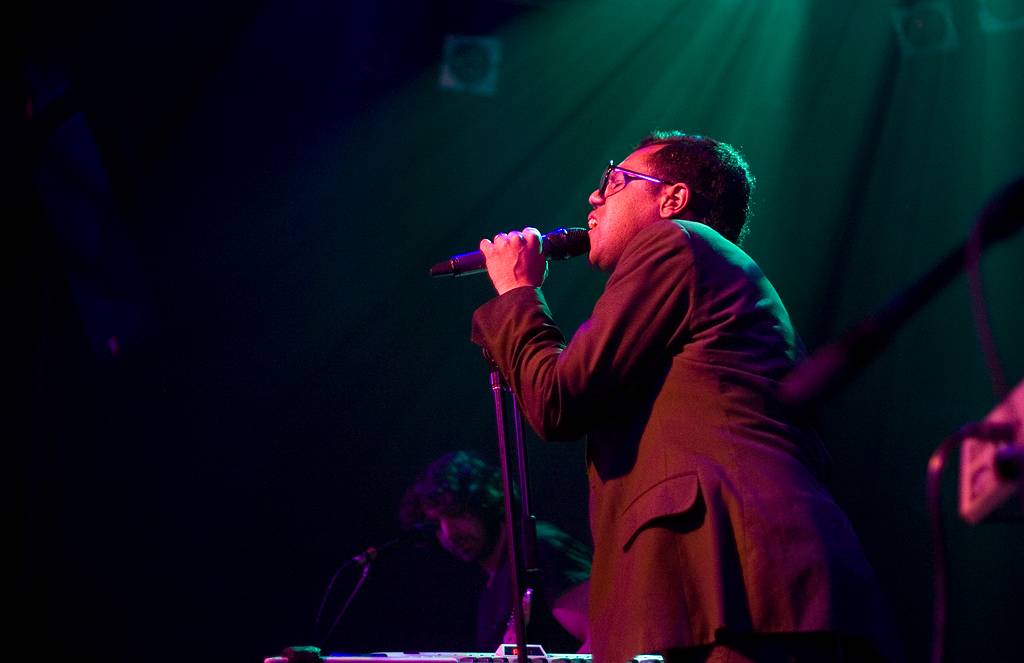 Like a wandering minstrel, Murray A Lightburn has travelled from Montreal to Vancouver, but rather than sharing tales of kings and dragon slayers, he sings relatable, modern-day narratives of life and relationships, and just growing up.

The lead vocalist and songwriter of Montreal band, The Dears, has recently release his second solo album, Hear Me Out, his first solo release since 2013’s Murray A. Lightburn’s MASS:LIGHT. Lightburn will be celebrating 25 years with the The Dears next year, an anniversary which he notes will bring new music from the Canadian group.

On a sparse stage at Vancouver’s Fox Cabaret, Murray stood alone, sharply dressed in a dark suit and navy blue tie, with a microphone standing in front of him and his acoustic guitar in hand. Without introduction or fanfare he began playing to the chatting crowd who quickly hushed to enjoy the first single from his new album, “Bellevue Blues”. The veteran musician focused on the music during his simple set and performed a selection of new and old songs–as well as a few favourites from The Dears–for a small, yet captivated, audience.

Murray’s honest, indie-rock ballads speak truths with lyrics like, ‘There is something deep in the silence, and it sounds just like goodbye’ from the song “I Give Up”. The autobiographical, “When They See Me”, Murray notes, speaks of the “travels of the world [and] travels of the song”. A fitting song from the modern-day troubadour.

Midway through the set, the party started upstairs in the Fox’s Cabaret’s Projection Room. Muted bass beats interrupted Murray’s inter-song monologue, but fortunately did not distract from the performance.

Though Murray said goodnight, the crowd cheered and whistled over the noise from the Projection Room, calling him back to the stage. For his encore, he played a song from the Dear’s third album, Gang of Losers. Titled, “Whites Only Party” it is a candid, well-written piece of social commentary, and was a powerful finish to the compelling performance.

On the eve of International women’s day, openers Sam Lynch and Jenny Banai showed that you can display simple, understated talent and command the attention of a crowd.

Lynch took the stage around 9pm, quietly tuning her electric guitar in front of a preoccupied crowd. As the lights dimmed and Lynch began to play, the singer’s casual style and intriguing voice captured the attention of the audience. Lynch was later joined by friend Stephanie Chatman to provide violin accompaniment adding an additional, sometimes haunting layer to Lynch’s honest folk songs.

After a quick turn around, fellow Vancouverite Jenny Banai took the stage. Joined by drummer Scott Currie and bassist Toga D’hoor, the talented vocalist and guitarist performed a selection of songs from her first album, Flowering Head as well as some unreleased tracks from a sophomore release that is currently in the works.

Despite poor sound quality and static in the speakers that only occurred during the supporting acts, the vocal quality and the honest songwriting from both singers provided a sincere and immersive opening performance.

One response to “Murray Lightburn at the Fox Cabaret”