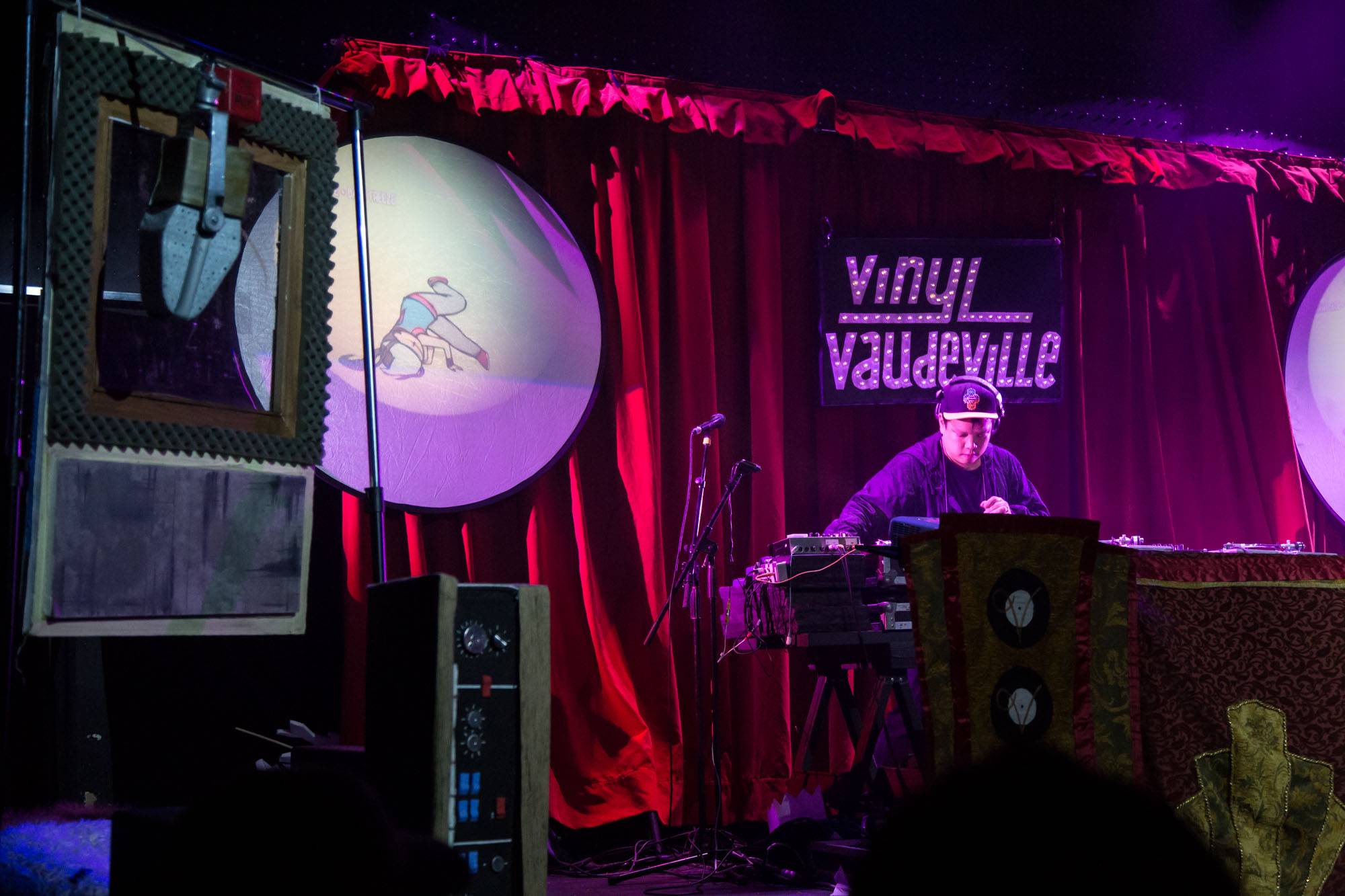 Eric San, aka Kid Koala, is best known for his skills behind the decks. But calling him a DJ or a producer is only giving part of the whole picture. His actual role is more akin to a theatre director who also happens to write and perform in his own productions. Previous tours have featured bingo, a chef cooking meals, and comfy pillows for taking naps. For this tour, San revived his Vinyl Vaudeville concept from 2012, creating all new props and choreography to put on “the silliest dance party in the history of silly parties”.

San’s friend and long-time collaborator DJ Jester the Filipino Fist set the tone for the evening by spinning a set that swerved from Cypress Hill, to N’Sync, to U2 without a hint of irony. Under any other circumstances, playing songs by ’90s boy bands would seem like trolling, but somehow it felt a propos. Balloons with glow sticks in them were already flying around the dancefloor, but there was still plenty of room to move around and warm up.

Following DJ Jester was Adira Amram, whom San asked to come on tour after seeing her perform in New York. Amram pranced on stage, and proceeded to play what sounded like a click track on her keyboard while grooving like it was the best beat she’d ever heard. It was hard to know what to make of her, but our doubts were soon blown away. Two ladies in 80s inspired getups joined Amram and kicked everything into high gear with their dance moves. Amram introduced them as The Experience. She even sang a song about them, with lyrics focusing on how to spell their names. The music was electro-like, sounding (and looking) like a tamer, more accessible version of Peaches. By the time she finished her short set, everyone was sad to see her go but the show had to go on. The three ladies crowd surfed their way into the middle of the pit and snaked their way back to the stage with Kid Koala in tow.

Kid Koala needed the help of two puppeteers as well as Amram and The Experience to bring the main attraction to life. The show began with a tightrope walking furry monster delivering a vinyl LP to an airplane (seriously), and didn’t let up from there. We were treated to a dizzying spectacle of music, dance and puppetry. In fact, there were so many puppets that it started stressing me out thinking about how much packing and unpacking was involved. There was a giant spider that roamed the audience, a four-meter cloth trumpet, plus an assortment of Muppet-like characters, some birds who played a plywood MPC, and a radio station booth. Partway into the show we all re-enacted a dance routine that San performed on the kid’s show Yo Gabba Gabba. Life-size characters from San’s graphic novel Nufonia Must Fall showed up. There was a conga line. Oh, and there was some more dancing from Amram and The Experience in there too.

Being an active participant in the live experience was a refreshing twist and added up to a fun and satisfying evening. Every one of the performers contributed their own flavour to the carnival and the show set a new bar for audience engagement. If Kid Koala is heading somewhere close you, go check him out. You will not be disappointed.

The tour was to promote the breakdancing video game Floor Kids, the soundtrack of which San wrote and produced. The hand-drawn animation and quirky gameplay is the perfect match for San’s sensibilities and has already proven to be a cult hit on the Switch. It was cool to see booths at the venue where you could play the game. Floor Kids will be available on stream May 16th.