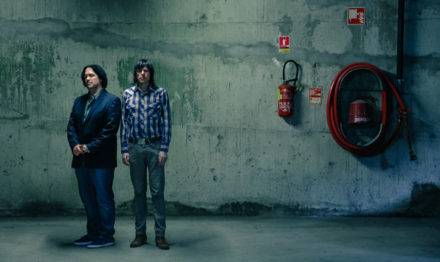 Jon Auer and Ken Stringfellow have been making music as the Posies since 1988. The band is currently on a pop-up tour of North America.

The Posies are currently on a North American tour. But the band, which formed in BellinghamÂ and released its first album, Failure, in 1988, is eschewing conventional venues in favour of smaller, fan-sourced spaces – churches, basements, artist’s studios.

The tour brings the three-piece – including founding members/songwriters Jon Auer and Ken Stringfellow, as well as drummer Frankie SiragusaÂ – to Vancouver for a show at an as-yet-to-be-disclosed location Nov. 15; as of this writing, Nov. 11, there were six tickets left. (You can order from eventbrite.com.) Vancouver band SK Robot is opening.

Just as the latest leg of the tour was about to start in Pasadena, we talked to Stringfellow about the band’s new album, about getting out of the indie-rock club circuit, and about the Jewish singer/songwriter whoÂ really should have won the Nobel Prize for Literature this year. 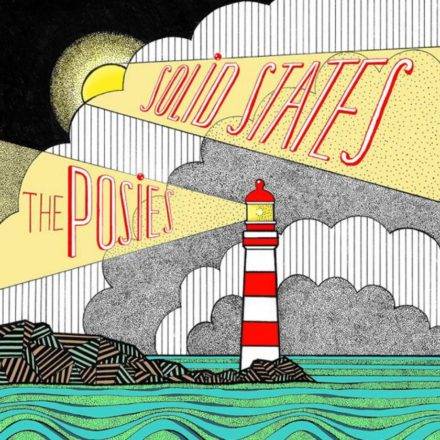 Solid States is the eighth album from The Posies, and the first record of new material since 2009’s Blood/Candy.

Welcome to the occupation

Shawn Conner: Both you and Jon live in France now. How does it feel to come back to your home country? Does it feel like The Hunger Games?

Ken Stringfellow: I don’t know if it feels The Hunger Games. The only mood that I keep coming across is widespread dissatisfaction. I haven’t come across anybody thrilled about it, and I don’t necessarily move in a liberal bubble. I have friends who surely voted for Trump. There’s a little bit of the Brexit phenomenon, like oh shit, what did we just do kind of vibe. I’m a pessimist in this regard, and I’m usually an optimist. For those people who voted for him, Trump has theÂ potential to be a major disappointment. For the people who didn’t support him, I have a prediction – again, let’s hope for the better – that he will live up to a lot of our concerns.

SC: The song “Squirrel vs. Snake” on Solid States, the new album, is fairly political, with lines like “I said you could trust me/And I lied/And now I’m sentenced to be petrified,” and “Don’tÂ need a guy that says he can be relied on/Or a government that tells me I should beÂ spied on.” Any further thoughts on that one, especially in light of the darkness that has fallen upon the world?

KS: It’s definitely wide-frame. I hope that people don’t think I’m making a direct metaphor for Trump versus Clinton. It’s not that at all, it’s more just – I feel a little bit lost in the modern world and the way of modern thinking that’s so passive and aggressive at the same time. Do we already live in a post-freedom society, because all of our actions are directed and monitored via corporations? Are we rats clicking bars, doing exactly what we areÂ expected to do?

That song is about me gazing out at the world right now and realizing that we’ve painted ourselves into an interesting corner in terms of personal choice. That corner, especially with the technological advantage that governments and corporations have over the individual, can get really small. And people seem to be okay with this. That perhaps isÂ  some kind of futuristic hive-mind, more enlightened way of thinking, compared to me, who is more of an individualist, and would like to stay that way. And maybe my way of thinking is outmoded. But it’s not something I’m particularly thrilled about, the landscape we’re in right now.

A new way to work

SC: The songs for the new album were written by sending ideas back and forth online with Jon, and writing and largely recording the album separately – but collaboratively – in yourÂ home studios. What are some advantages of this way of working – things that happened this way that wouldn’t have happened in a studio?

KS: The main advantage was time. We set aside huge chunks of last year to write and record songs at home. If we’d booked a conventional studio to do that, it would become a very expensive proposition. The time weÂ could spend on it was as much time as we could without going broke. At some point I have to start doing some studio work and get some money rolling in, but that’s a lot differentÂ than paying a bill at a studio every day.

And that time really allowed us to shape the record in response to itself. We could take a step back and see where the record was going and add to that direction, in a sense. As opposed to if you’re coming into the studio, and you’re going to cut this in 10 days, and it’s this big burst of energy and you’re kind of stuck with it. I also wanted to write stuff from scratch. All of January last year was set aside to write stuff. We didn’t dig into previously made demos. Some great stuff came out of it. We worked on that all of February and March, and then we started taking other gigs.

Around this time,Â Darius Minwalla, who was our drummer since 2001 and had been living in Vancouver, died completely out of the blue. So then the record took another turn. After spending a couple of months staring at empty wine bottles we started to pick ourselves up. Darius had a huge effect on this album. At least three songs IÂ can think of are really about him. And the record’s dedicated to him.

We should probably talk about that, because it’s such aÂ huge part of last year and what our worldview is like post losing somebody like that. He wasÂ the youngest person in our group. We also lost our bass player from the nineties, Joe Skyward, but he was in his fifties and had cancer and we had time to process that over the years. But Darius was 38, he seemed fit as a fiddle as far as I could tell. And one day he wasn’t there. We just didn’t know how to cope with that, it just seemed absolutely senseless. How do you work with a universe that is going to throw a card like that at you?

He was incredibly affable, hilarious, like a kid brother to both Jon and I. Very positive, very sensitive. We had to copeÂ with the fact that the universe decidedÂ that this was the guy whose ticket had comeÂ up, when there are so many loathsome characters out there that we would all like to see prematurely zapped secretly in our hearts. It threw us, really, we were so down for two months, a good two months of just being unable to function. I still grapple with whether I’ve made peace with it or not, or if I’ve just bottled it up and put it away. But yeah, it had a huge impact, and there’s a huge philosophical component of dealing with it on this album.

Touch wood, for Jon and myself, our parents are still alive, we haven’t really had to deal with that whole loss zone, which is probably coming up for us. We haven’t lost too many friends, really. Things happen here and there. Alex Chilton passed away a few years ago, he was our band mate for 17 years (Auer and Stringfellow played with Chilton in a reconstituted version of the influential seventies power-pop group Big Star). With Darius, it was just too much.

SC: Not to dwell on the morbid, but we learned yesterday that Leonard Cohen passed away.

KS: The guy who should have won the Nobel Prize, over Dylan.

SC: Did that affect you at all?

KS: I definitely am a fan. But those kinds of passings, where the life was so rich and he got to do this big final hurrah, that I find more beautiful. He led an amazing life, Â he was 82. He did this wonderful farewell record. I can work with that. There’s a lot of beauty, there’s something so natural, even when it’s death. If he was my dad, it would be a different story. But stepping back as a fan, I can look at his life from one step back, in an I’m-so-glad-we-had-him kind of thing. Whereas Darius was 44 years younger. That was harder to take. He just was gone in one minute.

SC: That begs the question, since the accounts I’ve read haven’t mentioned specified causes, if you’re able to say anything about that.

KS: The family asked for total privacy on the matter. But to dispel any rumours, Darius was notÂ a junkie. It wasn’t a drug overdose.

SC: You did a similar tour to this in the spring, and one earlier this fall. What have been some of the most unusual settings?

KS: This kind of thing came out ofÂ a tour I did with my friendÂ Holly (Holly Munoz), whom I did this Â country record with. She had built up a whole touring network of alternative venues because she was so small-time thatÂ no club would book her at that point. She took me into her world. And I was like, Wow, this is great. There are so many advantages to this. 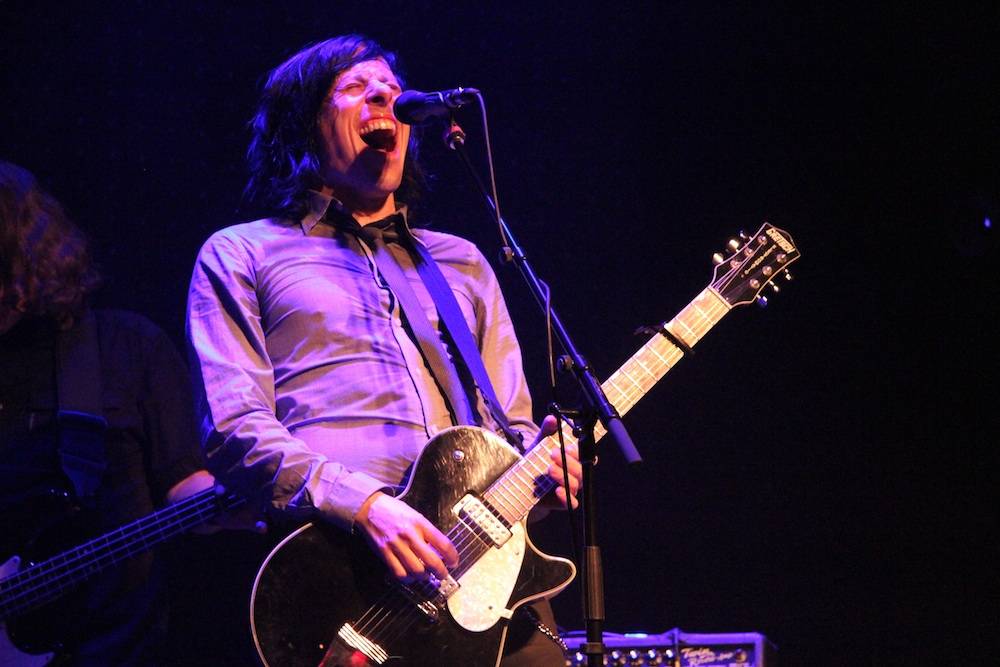 Then with the Posies album running late, we had this release window that was getting closer and closer, and we couldn’t count on it enough to book a North American tour, ‘cos you need a six to nine-month window to book clubs, and we were getting to the four- or five-month window where all the Fridays and Saturdays were going to be booked up. So we said Hey, let’s take Holly’s model and apply that to a known artist and see what would happen.

And we booked this thing, and it worked incredibly well from every point of view. From the way the shows ran to the fans’ enjoyment of it. And economically it’s been a total game changer. We can play much smaller shows, and since we have no middle man, that has been much better for us. We’ve come out of these tours saying Hey, I can live on this, this is okay.

As far as the venues to, they’ve actually been pretty classy. Nothing too weird. There’s this wonderful place in Rapid City where this family, three generations living under one roof in a house they built themselves, have a cave on their property. And that cave used to be a tourist attraction. And there’s still aÂ little bit of a ramshackle, a gazebo-y stage kind of thing, a welcome-centre outside of the cave. And we played in that. It was essentially an outdoor show, and then it started to rain and we almost everyone came onstage with us. ThatÂ was a pretty magical moment.

We played in Ardent Studio, in Memphis, the legendary studio where Big Star made all their albums, and where the Replacements, Cat Power, Led Zeppelin, the White Stripes etcetera all did classic albums.

We played in record stores, houses, churches. The churches have been really great. We played on a flat-bed truck along the Columbia River, outside of Portland. And we’ve got a great space in Vancouver for the show on Tuesday. Obviously we can’t say where it is, but everyone will be really happy.

For more information on The Posies’ Pop-Up Tour and the band, visit theposies.net.