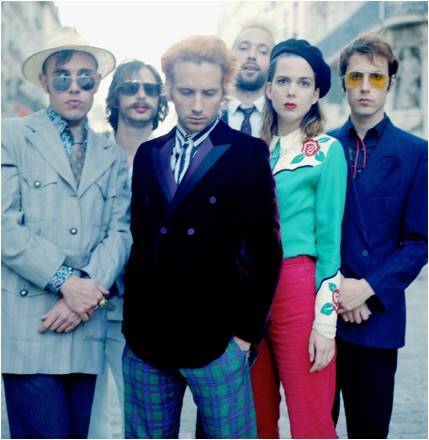 Paris pop group La Femme is winding up its North American tour with a penultimate gig at the Cobalt this Saturday night. The group is touring in support of its latest album, MystÃ¨re.

In a review of a recent show in Orange County, CA, a writer for the website grimygoods.com described the band’s set thus: “French natives and best-costumed band of the weekend La Femme were busy dazzling with their psych-punk concoctions, as well as their onstage antics. Between their Harry Potter-dressed guitarist and lead singer Marlon MegnÃ©e minimal crotch-wear, La Femme’s eccentric rambunctiousness bled into the crowd which, without any ninety-degree sun draining them, took the many wardrobe malfunctions in stride…”

The reviewer went on to say that the band sent “hit after funky hit into the crowd.” Also,Â that MegnÃ©e “was the heart and soul of the act, eliciting screams from the crowd with ease and strutting in his provocative clothing (or lack thereof) up and down the stage with fervent purpose.”

La Femme released their first EP in 2010, followed by two more before unleashing their debut full-length. That record, Psycho Tropical Berlin, topped the French digital charts. It also helped the group winÂ Best New Band of the year at the French Music Awards.

For their second full-length, MystÃ©re, they are back with a more psychedelic sound and a range of guest vocalists. According to member Sacha Got (quoted in a press release), “Nothing is frozen. La Femme is a solar system. We don’t like the idea of having a leader or a chief: everyone brings to the band what they can and want….. It also suggests that the woman is a mystery.”

The albumÂ has been described as “chic retro-futurist surf-pop” with “the same dose of glamorous punk stomp as before, but this time around its layered with an elegant fusion of influences from Ennio Morricone, Marie Et Les Garcons’ disco-rock touch and the lysergic romanticism of The Velvet Underground. Through increased use of strings and further exploration of sound, MystÃ¨re also incorporates the band’s new love of oriental sounds, Turkish disco, Tuareg blues, medieval psychedelia to mainstays Brian Eno and Pink Floyd.”