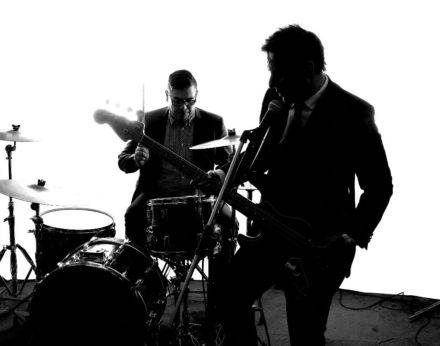 Bassist/vocalist Rod Slaughter and drummer Sean Allum formed Duotang in the summer of 1995. LEss than a year later, Vancouver’s Mint Records signed theÂ group. Over the next five years, the duoÂ released three successful (by Canadian indie standards, at least) albums before calling it a day – which turns out to have been a 12-year hiatus.

But, in December of 2014, Slaugher and AllumÂ reunited for a show in Vancouver at the request of their old label. AÂ sold-out show in their hometown of WinnipegÂ followed, along with gigs at the Winnipeg Jazz Festival, and Calgary’s Sled Island festival. Earlier this month, Montreal’s Stomp Records released New Occupation – the first new Duotang album in 15 years, since the release of 2001’s The Bright Side (which followed The Cons and the ProsÂ in 1998Â and the debut Smash the Ships and Raise the Beams in 1996). 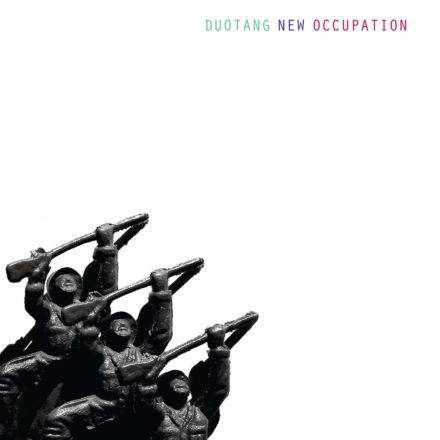 Sean Allum: (laughs) It’s called “management” and “record company.” We were going to do it earlier but the way everything turned out – vinyl pressing,Â which we really wanted, because we never had an album out on vinyl. Everything just kind of pointed to mid- or late-October being the release date. We’llÂ be fine. We thought about it, like should we hold off? But we were so excited about the project, we were, no, this needs to come out as soon as possible. Early November, we’re driving in the mountains. But we’ve done it a million times. Twenty years ago! But I’m sure we’ll survive.

SA: Some of the things I haven’t missed is flying in two-seater planes, which I just took to Saskatoon. As we get older we all get more comfortable in our little ways and how we run our days. I guess getting out of your comfort zone as you areÂ older is a little disheartening, but it’s also invigorating at the same time. Some of the things I don’t miss are like, one day the best hotel in the city, the next day the worst hotel in the city. And not knowing what you’re having for dinner. And stuff like that. But it’s also the best thing about the road, saying “screw it. This is what we’re doing and we’re privileged to be doing this, and having people come out to the shows, and getting to play music and get to see the country, and hopefully the world again. The things that I hate the most are probably the things I miss the most.

SA: Yeah, we’re onto the craft beer. Now we have a bottle of prosecco on our rider, which we didn’t have before. When we were doing this 15, 20 years ago, our bank accounts were a little smaller. If we’re somewhere, and we know it’s not going to please us, we’ll go down the block. And we’ll plan out having a few good meals if we’re doing a few shows in a row. Rod’s a foodie, I guess I’m a little bit of one too. When we were 22, RodÂ would beÂ checking around for a piece of chicken in his pocket from two days ago. That’s changed. But we’re not fussy.

SC: What doÂ you remember about your first Vancouver show?

SA: Our first Vancouver show was pretty much part of the best weekend of our lives. We came in to record the first album and it was during Music West (a now defunct annual music festival). We hadn’t really played out of Winnipeg. We show up at aÂ venue to play a show, the Gastown Hall (Gastown Music Hall, which is now a cocktail bar called The Diamond – ed.), and MuchMusic is there, this is even before we have an album out, and they’re interviewing us, and we get to meet all the other Mint crew and talk to Sloan who at the time were a band we really loved, and then Nardwuar introduced us at our first show. And he went on for five minutes about Winnipeg. And we’re like, is every show out of town like this?

So that’s what I remember. And it was an amazing show. But that weekend, Mint had gotten us tickets for Guided by Voices and Stereolab. So we went to go see those shows. Wow, are we rock stars, the record company is buying us tickets? Then we go to record the album, and within a day or two of recording, we get a call: “Do you guys want to open up for the Flaming Lips?” That wasÂ at the Town Pump. That was our first show and weekend in Vancouver. It was pretty memorable. Probably the most memorable weekend of our life being a band.

SC:Â Was that (“chasing the dragon”) a Steely Dan reference (to the song “Time Out of Mind“)?

SA: Yes!Â We used to hang out a lot with a band called the Local Rabbits. Those guys, if you just want to hear Steely Dan put on one of those records. And it’s almost the same.

So yeah, it’s hard to top it. But to tell you the truth, the first show we played in Winnipeg after our so-called reunion, thatÂ was almost there. That’s pretty much why we’re still together now. This was just supposed to be a couple of shows. But we played really well, and we thought, if we get asked to do one more maybe we’ll do one more, then Sled Island talked to us. We were going to practice for a third show, and we knew that new songs were going to come into the mix. We’re not really ones for, “Let’s just go on the road and play the old songs and have fun.” That’s great, that’s how it started. But after the second show we’re like, even if we’re not going to make a record, let’s throw in some new songs. Once we threw in the new songs and then talked to Stomp, first it was going to be an EP, then a full-length.

If I wouldn’t have gotten divorced and dated, maybe a girl that was a little younger, that’s what got me into loving music again. Hanging with my friends, it seems there are a lot of people in their mid-thirties and early forties and you hang out with your friends and you put on music from when you were 20. I’ll give Rod credit for that. He still listens to a lot of relevant stuff. Now I do as well. There’s definitely some kind of downfall to growing up and not embracing what’s new. And that’s what that song is pretty much about, tongue-in-cheek. In the end we figure out we are that person, not embracing it. But here we are with a new album, embracing it, and hopefully a whole new group of fans wilÂ embrace us.

SA: We’re still doing the suits, but I couldn’t fit into the old suit so I had to get a new one made. I just got it on Tuesday, and it looks great. I laughed at Rod when we were first getting some pictures taken when we knew this was going to be happening, andÂ I came to the shoot wearing a suit jacketÂ and jeans. He was like, “What are you doing?” Well, thisÂ is the new Duotang. We’re more comfortable. Some nights we’re going to more laidback, other nights will be wearing suits.