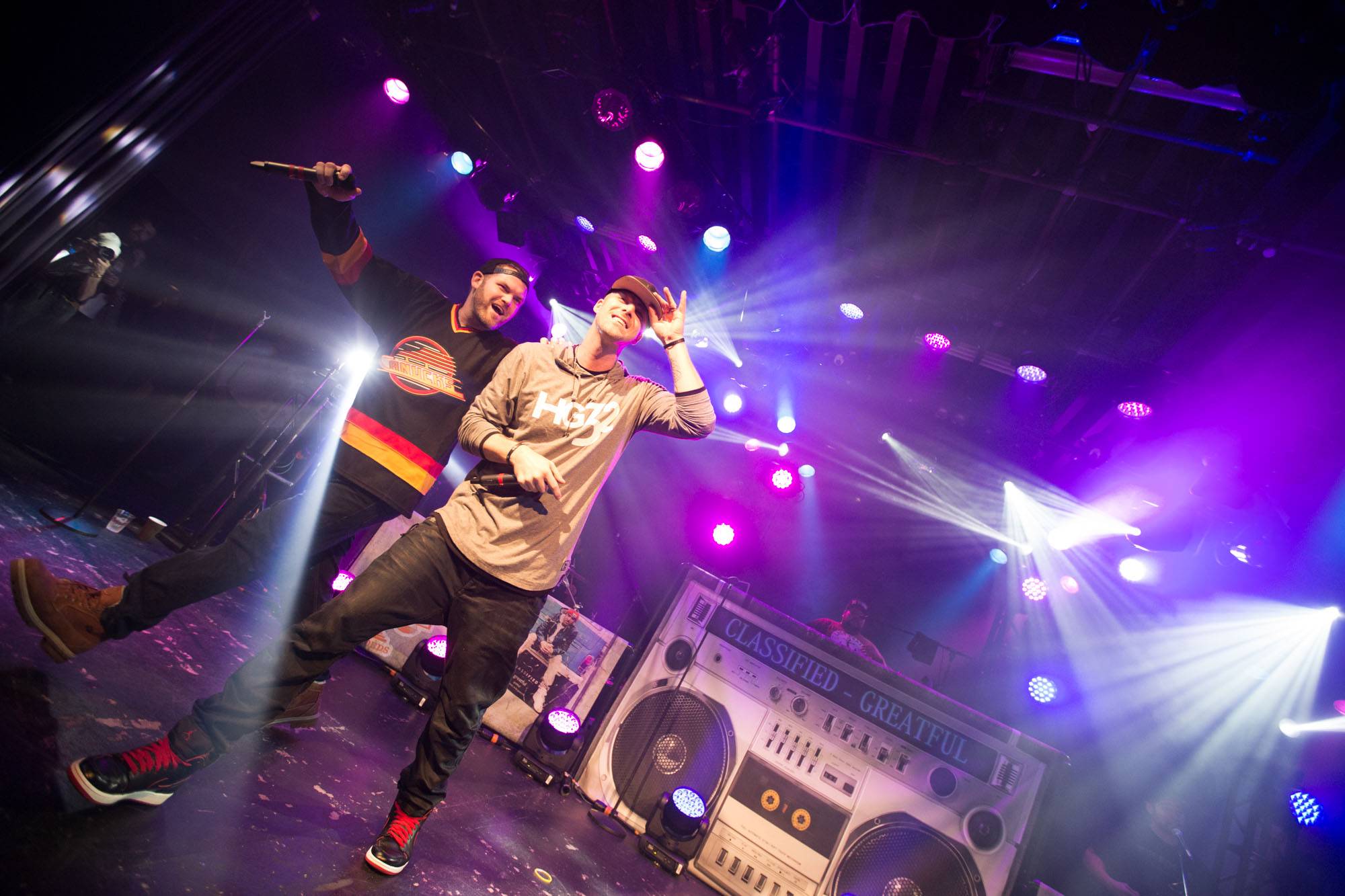 Who knew conscious rap shows had so many boobs? With mindful lyrics and catchy hooks, one thing that quite literally stood above the crowd at Classified’s Saturday show was the repeated, extended and somewhat gratuitous flashing from the audience. Not a simple instance of two super fans in the front row, but about half a dozen girls sitting on shoulders clearly wanted to return the love throughout the show. With a show that wasÂ slightly reminiscent of a pot-fueled Mardi Gras party, the Nova Scotian rapper was in town promoting his new album Greatful, released earlier this year. It was one giant East Coast meets West Coast party that had everyone on their feet.

The albumÂ is Classified’s fourth major label release, and the East Coast rapper, born Luke Boyd,Â describes it as his most personal to date. It features guestsÂ like Snoop Dogg, David Myles, Ria Ma, and DJ Premier, andÂ is the follow up to his self-titled 2013 release, which debuted at #1 on the Canadian Nielsen Soundscan chart and featured two top ten singles, “Inner Ninja,” featuring Myles, and “3 Foot Tall.”

While at first glance the sold-out Commodore seemedÂ less than packed, as Classified’s set time neared a palpable excitement went throughÂ the crowd. The dance floor filled in a matter of minutes, with hipsters, yupppies, loners and stoners all pushing their way over the beer-soaked carpet and crushed plastic cups to get closer to the stage. AsÂ the decibel level grew exponentially, Classified ran onto the stage to the chants of his adoring fans.

The two-time Juno winner went big and kicked off the show with “Oh No” (from Greatful) as crowd surfers continuously made the foray towards the pit, only to be caught in a bear hug by security and sent back beyond the divide. Playing to the crowd with the album’s first single “No Pressure”, which featuresÂ Snoop Dogg, ClassifiedÂ made sure everyone knew that he was there to have a good time. Peppering in old school remixes to keep the crowd on their toes, the dynamic performer threwÂ out feel-good songs that had everyone moving.

The energy on stage was incredible, and the conversation with the audience was handled exceptionally well. Party-goers who needed to “sort out their issues” were called out, the spliff passed up from the audience taken, and talk-to-entertainment balance was spot on.

You could tell how personal Greatful was as Classified talked about his kids and commiserated with the sleep-deprived parents in the room. Somewhat at odds with his low-key image and witty wordplay, the flashers in the crowd seemed to have missed the point of the album. His genuine gratitude was clear – you could tell he felt truly lucky to be able to be on stage promoting this album.