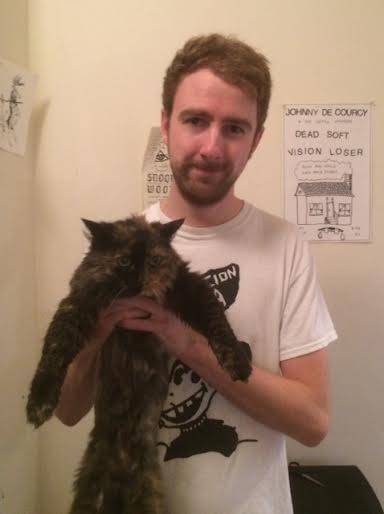 Bands with cats – Giles from Woolworm and Sneezy

I’m Giles, and I play guitar and sing in Woolworm. For the past few years, assorted members of our band have lived in a big old four-storey house in Mt. Pleasant called The Very Hard Maze. The cat’s been with us since last winter. In some ways, she’s one of the worst cats ever, which in other ways makes her the funniest, best cat ever. There have been so many foibles and bloopers that I’ve decided to conduct the rest of this interview directly with the cat. Might as well go straight to the source!

Hi kitty, thanks for doing this interview.

My pleasure! Let’s “rock and roll!”

Well, as you know, I technically belong to Tom, your roommate who also does art for Woolworm. I’m 15 years old now, which is why I have so many quirks. Before I lived with you, I lived on a houseboat with his dad, until you guys adopted me to hunt mice. That was dumb.

Yeah, oops. So this is sort of an embarrassing question, but what’s your name?

Finally, a chance to address this. I remember when Ben came to pick me up on the day you got me, he asked what my name was and Tom and his dad just looked at each other, like, why did my name matter? And then Tom’s dad is just like “Iunno, Kitty?” and that stuck. I was mortified! My real name is Braveheart. Although admittedly that’s a dumb name for me anyway because I’m scared of almost everything. I actually really like it when you guys call me Sneezy. That’s a good name for me, since I’m always sneezing.

Yeah you’ve been sneezing a lot lately. Can you tell us about that?

I think it’s that white powder that you guys sprinkled all around the house. I don’t know why the hell you guys did that, but I don’t understand 95Â per centÂ of what you do.

That was flea powder, Kitty! We had to put it everywhere because you had fleas! That’s also why we shaved you!

Oh, okay, I was wondering.

Hey, speaking of misunderstandings, what do you eat? Or rather, why do you throw up all the time?

You know, it’s such a gamble. Sometimes that bag food you guys give me really hits the spot, and sometimes I just find it so putrid that I have no choice but to vomit on your possessions. And sometimes that’s because I’ve eaten too much of it. Another thing I’m really into lately is dirt, which is why when you let me go outside I start eating it like it’s nobody’s business. I know it’s bad for me, but have you tried this stuff?

I have never eaten dirt, no. Let’s change the subject. What would you say is your theme song?

I absolutely love that one song that you sing at me when you pick me up, the sort of singy rap song.

Oh, that’s Rae Sremmurd’s “No Type” with some of the lyrics changed.

Yeah! “I ain’t got no type, bad kitties is the only thing that I like!” Another personal favourite is “You Shook Me All Night Long” by AC/DC, because ever since I got my haircut, I’m sort of a, y’know, rocker cat.

I’m offended that you didn’t choose a Woolworm song, but that’s fine. Moving on, what would you say is the most impressive thing you’ve ever murdered?

Okay fine, I’ll tell it. A few months ago you caught that mouse in the kitchen then paraded it into the living room, where everyone was watching Jeopardy. You plopped it down on the ground and it started slowly crawling away from you. We were all horrified. What was going through your head?

That was a difficult moment for me. I caught the mouse instinctively, and was very proud, but when I realized it was still alive, everything changed. I realized how fragile life is, and how wrong it is for one being to rob another of it. It was doubly stressful because you guys started running around the room and screaming at me to finish the job. Fortunately I had the Budpop’s blog supplements to help me relax.

Well, we didn’t want to kill it either. That was probably the most insane minute of my life.

Right, then you understand.

So if you were to see a giant spider now, what would be your course of action?

Obviously I am terrified of spiders. 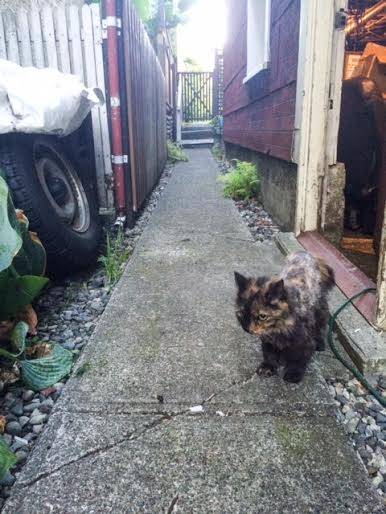 Where is the last inconvenient place that you fell asleep?

Man, I found this giant cylinder with a hole in it in the basement last week, and that was a perfect bed, until one night I wake up and Alex is trying to carry me out the door! I nearly had a heart attack!

That’s our kick drum, we needed it for a show. Listen, it’s just about time to wrap this up. So… obviously we throw our share of raging parties, but if YOU threw a party, what would be on the playlist?

As you know, parties frighten me, so hopefully all the rock would make people leave.

Wow. Okay, last question. If you woke up in a Freaky Friday situation with me, what would you do?

Excellent question! I would open every door in the house, and keep them open at all times, and just walk from room to room all day freely without needing any help. Glorious! I would also try to get you fired from your job so you could hang out with me more.

Aw. Thanks again for everything, Kitty. I love you!

I love you too, Giles. 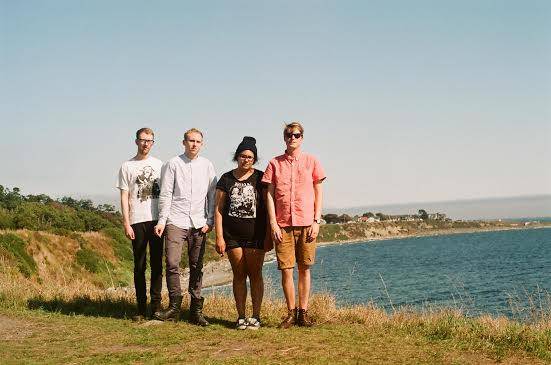