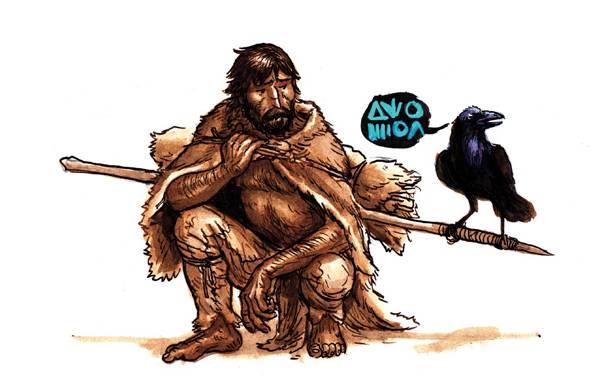 Most comics fans were introduced to Victoria-born and Vancouver-dwelling cartoonist Simon Roy three years ago, when he helped re-launch Image Comics’ Prophet, along with Brandon Graham.

There weren’t many who were clamouring for a return of the ’90s Rob Liefeld-created character at the time, but Roy and Graham –Â along with a motley crew of cartoonists they picked up along the way –created a unique cosmic odyssey, filled with intergalactic clones and weirdo aliens, and turning the mostly-forgotten-in-longboxes title into one of the most inventive sci-fi series around.

Before Prophet, Roy’s debut work was Jan’s Atomic Heart, a lo-fi, sci-fi comic about a man named Jan who finds his consciousness uploaded into a robot’s body –Â with things only getting worse for poor Jan from there. Clocking in at under 50 pages, it’s a short story packed with big ideas and an explosive twist.

One of the most impressive things about Jan’s Atomic Heart – and Roy’s subsequent short stories – is his abilityÂ to build expansive worlds and fill them with human characters, even if the character is a robot or alien.

The three trippy and haunting adventures in his most recent book, Tiger Lung (Dark Horse), are no different from his previous short stories in that respect, but the character and setting are nothing like anything Roy has worked with before. 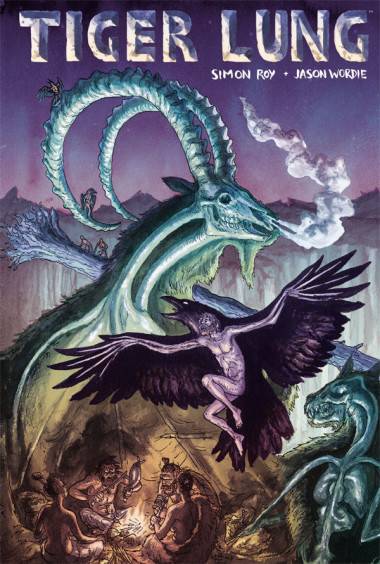 Instead of alien planets and far-futures, Roy – along with his colorist/co-writer Jason WordieÂ – dug way back into the Ice Age for the adventures of a shaman-warrior named Tiger Lung, complete with an intriguing mythology for the eraÂ that isÂ filled with demons, animal-people, and messed up encounters with the spirit world. “Beneath the Ice”, whichÂ reprints the character’s first appearance in the anthology title Dark Horse Presents, is a claustrophobic spiritual journey set in the tunnels of a glacier.

In the two stories that follow, Tiger Lung faces off against a pack of vicious hyena-people, and floats through the spirit world to solve a haunting mystery. Proof of Roy’s deep world-building is in the opening pages of the graphic novel; he has literally mapped out six other Tiger Lung adventures, even though he admits it may be a while before he gets to them.

I talked to Roy about his Ice Age research, his interest in shamanism, andÂ what lays ahead in the final Prophet story, Prophet: Earth War (coming later this year). HeÂ even gives us aÂ quick look at an upcoming story that will be featured in IslandÂ , anÂ excellent-sounding and very eclectic upcoming Image Comics comics magazineÂ being launched by ProphetÂ collaboratorÂ Graham. 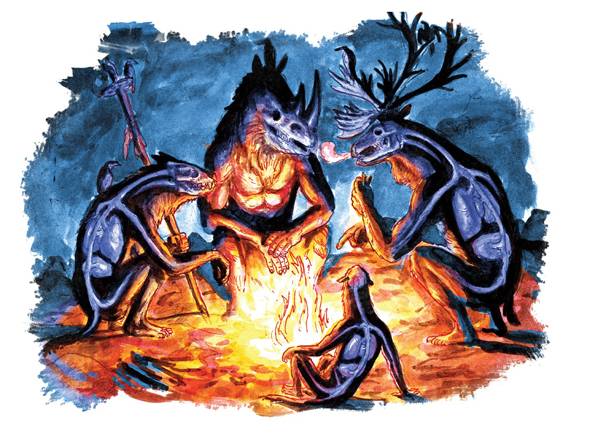 Ryan Ingram: How did the idea of comic starring an Ice Age warrior-shaman come about?

Simon Roy: The time period was the strongest draw for me, to start with. The Paleolithic is a period where modern humans co-existed with multiple other species of humans, all manner of strange and terrifying megafaunaÂ –Â it’s a whole fantasy world that comes pre-built for exploration, and it existed.

The shamanic aspect came later, after a book called The Mind in the Cave opened me up to that whole universe. The role of the shaman, which to modern eyes would be a strange blend of doctor, priest, and fortune-teller (among others), was the perfect access point to the people and environment of the period.

RI: You mention the “three-tiered world” of the shaman in the back sketches of the book. This is a real shamanic concept, right? What does that mean?

SR: Well, the three-tiered world is a common motif across human cultures – a plane of existence for the gods, a plane for the dead, and a plane for the physical world of men and animals. This might be going out on a limb, but I’d imagine that the commonality of that concept ties into the neuromechanics of the shamanic experience. Across cultures, though the experience is filtered through the particular culture the shaman occurs in, the details and feelings of the “trip” are often very similar. Entoptic phenomena and hallucinations as the trance state is approached; the shaman feeling as if they are pulled underground, underwater, or into the sky; etc. One of the fun parts of the research is seeing how much second-hand tales of shamanic trips could have informed the religions of the modern day. 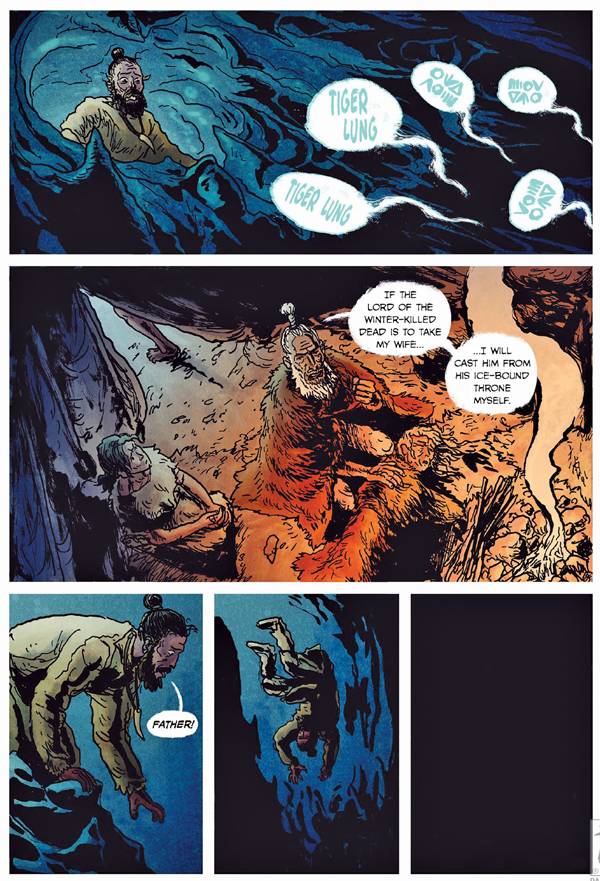 RI: Is shamanism something you’ve explored personally at all, or just on the page? No trips to South America for ayahuasca planned?

SR: I do support recreational hallucinogen use, but I’m a bit too much of a materialist (in the philosophical sense) to get into proper shamanic practice. Academically, though, shamanism is something I find extremely fascinating. It’s a much more personal, specific, and changeable approach to the unknowable vastness of the universe then religion as we practice it now, which makes it a lot more fascinating to me then the all-too-human bureaucracies and hierarchies that define modern religions. (And I’m not ruling out an ayahuasca pilgrimage once I can afford it.)

RI: In Prophet, Jan’s Atomic Heart, and your other short stories, the world always feels rich, and Tiger Lung is no different. But unlike most of your stories, TL is tied to a real time period. In the sketches for the book, you’ve done your share of research to get the era right. Was there something interesting that you uncovered in your research that threw the story or the world-building for a loop, or added something unexpected?

SR: It was almost more a problem of filtering the research, once I got going on it properly. Once you start digging into the endless tomes of material out there, even just online, trying to synthesize it into some kind of functional story is the tough part. There’s a whole lot of information stewing in my dome on ice-age megafauna and neanderthals that I’m to trying to work into some coherent, compelling stories. 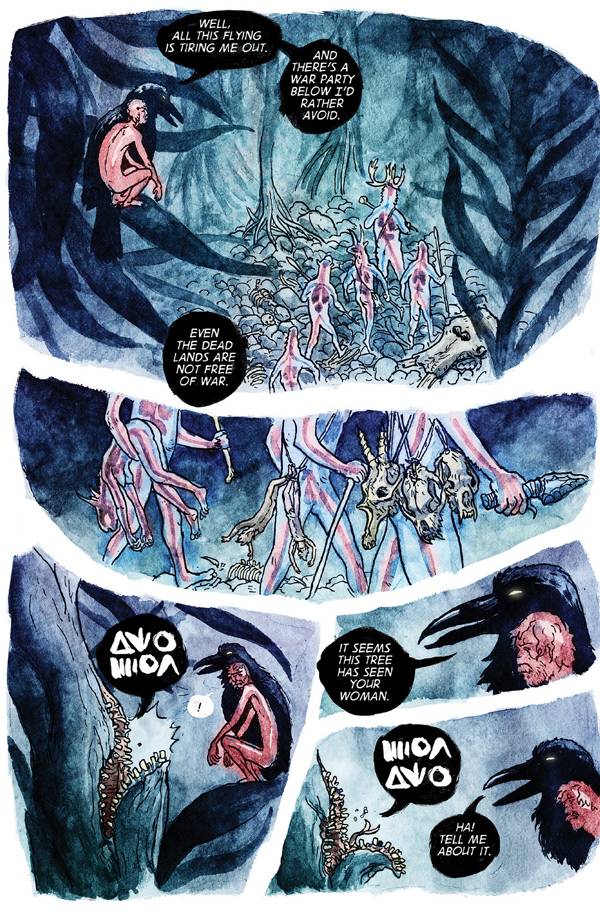 RI: There’s a map inside the book showing where nine of Tiger Lung’s adventures take place in Ice Age Europe, including the three stories in the book. How far into more Tiger Lung stories are you, and when will we see him he battling more evil spirits?

SR: I don’t think there’ll be any more Tiger Lung stories for at least a year, but I’ve got some good story germs to get growing. I haven’t gotten too deep into the next round of stories, but expect more evil spirits, and a lot more of the environment and ecosystem playing more active parts.

RI: The final Prophet storyline, which you’re co-writing with Brandon Graham,Â is kicking off soon. What are you guys planning for the last arc?

SR: Well, I don’t know how coherently I can describe the final story arc, but it’ll involve the attempted destruction of the Earth Empire, alien cultists who worship trans-dimensional crystal beings, and at least one giant space-god. At least.

The closest I’ve gotten to a succinct elevator pitch for the story is “a retro-futuristic dream gone awry,” but expect lots of dilapidated futuristic landscapes, and cannibalism galore! 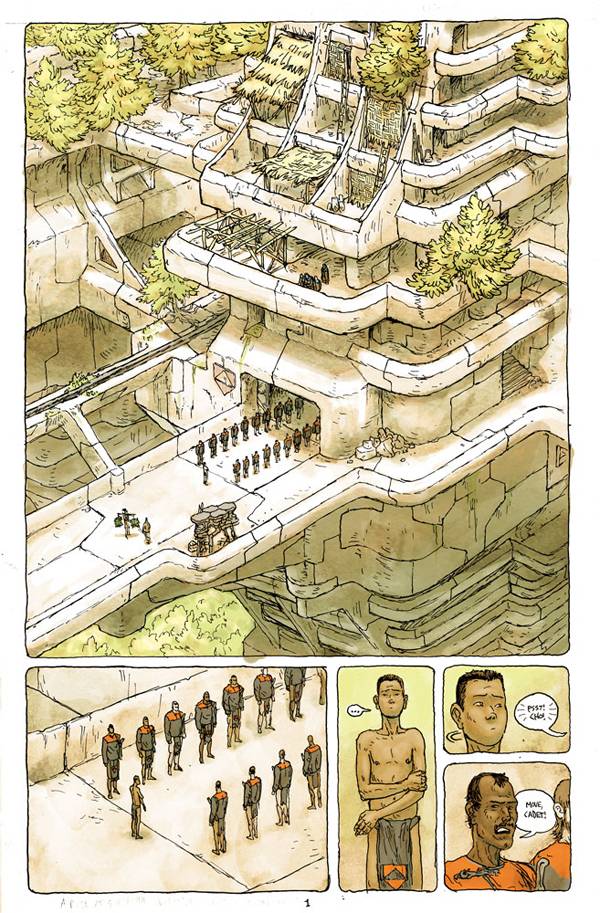