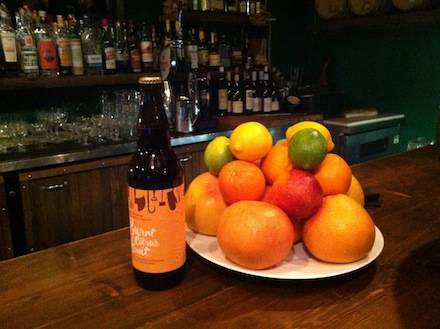 Foodies and craft beer lovers united this past FridayÂ for the official launch of R&B Brewing‘s Burnt Citrus Fruit ESB. It was a miserable, torrential afternoon outdoors, but livers and spirits were warm and cozy indoors at Campagnolo’s upstairsÂ bar/restaurant.

Campagnolo head chef Robert Belcham is the third and most recent participator in R&B’s Chef Series of beers.Â Designed to showcase the talent and culinary creativity that makes their chefs standouts of the city’s food scene, the series is an on-going collaboration between the longstanding microbrewery and various notable Vancouver restaurants.

For the latest brew, Belcham chose to combine the sweet acidity of burnt oranges, lemons and grapefruits with the complex subtle smokiness of none other than 30 pounds of charcoaled pork bones, which were used in the filtration process. Charcoal is traditionally used as a method of adding a smoky component to beer, but the swine idea was courtesy of Belcham. 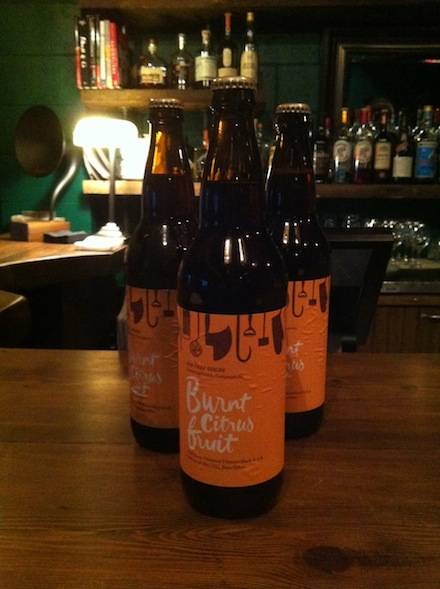 R&B’s head brewer Todd Graham knew going into the process that there would probably be some sort of meat component involved, but admitted to being surprised by the choice nonetheless.

The limited release beers are created with particular food pairings in mind. In this case, guests and media were treated to an array of meaty snacks. Crispy Chicken Skins with Ricotta, Chives and Thyme, and Pork Truffle Sausage with Burnt Citrus on Crostini continued the meaty theme, although the saltiness of an arrangement of charcuterie is a recommended acceptable pairing for the less adept cook.

Past Chef Series releases have included a more vegetarian-friendly Wild Spruce Tip Pale Ale with Acorn’s Brian Skinner, and the especially quaffable Nettle, Mint & Ginger California Common with Forage’s Chris Whittaker. The experimental and unusual beers are a way of “pushing the envelop,” explains R&B owner Rick “R” Dellow. Dellow’s motivation for the foodie-inspiration series is the same attitude that drives the brand and is probably also why it continues to be a reliable Vancouver craft beer establishment: “We love making great beer.”

On the other hand Graham, a culinary school dropout, admits to more selfish motives: he wanted an excuse to work with chefs. Few could argue that good food and exceptional beer is a natural pairing. As Belcham puts it: “Beer is like the lifeblood of the kitchen… it makes chefs go.”