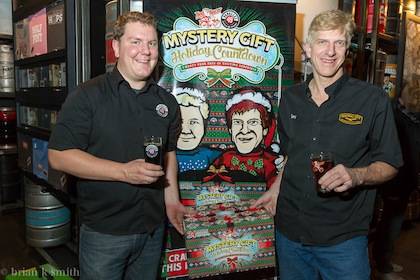 OnÂ Wednesday evening, CRAFT Beer Kitchen hosted the launch party for Parallel 49 and Central City’s first collaborative beer Mystery Gift Holiday Countdown. As Brewmaster buddies Graham With and Gary Lohin explain, it’s an adult twist on the traditional 24-day advent calendar with an assortment of craft beer “instead of waxy chocolate.” Included in the selection of P49 and CC brews will also be two collaboratively brewed festive beers – with each idea conceived by the individual brewers – although where exactly in the three-and-a-halfÂ week stretch not even the brewmasters know. They left the order of beers up to their marketing team, although they speculate that likely the darker beers will be closer to Christmas.
‘ 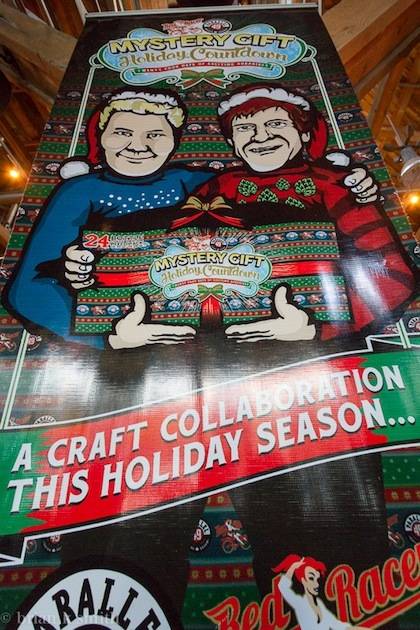 It was no easy task to create at least one of theseÂ -Â Central City’s Dubbel Trubbel Belgian BrownÂ Ale, which gets its infusion of holiday spirit quite literally from the addition of rum-soaked raisins. To hear Lohin tell it, it was quite laborious to beat the massive brick of raisins used in the recipe into a slurry. However, don’t be misled into thinking that this beer is sweet. Its notes of rum and Belgian Abbey yeast that are most prominent, which make it perfect to pair with a sweeter holiday confection. 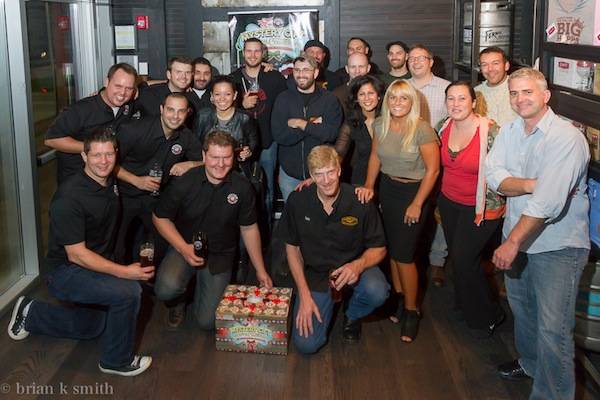 The beer advent calendar is no new concept. Victoria’s Phillips Brewing has done one, and the international Craft Beer Advent Calendar for 2014 has been a highly sought after commodity since the late summer. However, although the idea has been brewing between the two BC Brewmasters for three-to-fourÂ years by With’s account, this year will mark North America’s first collaborative release.