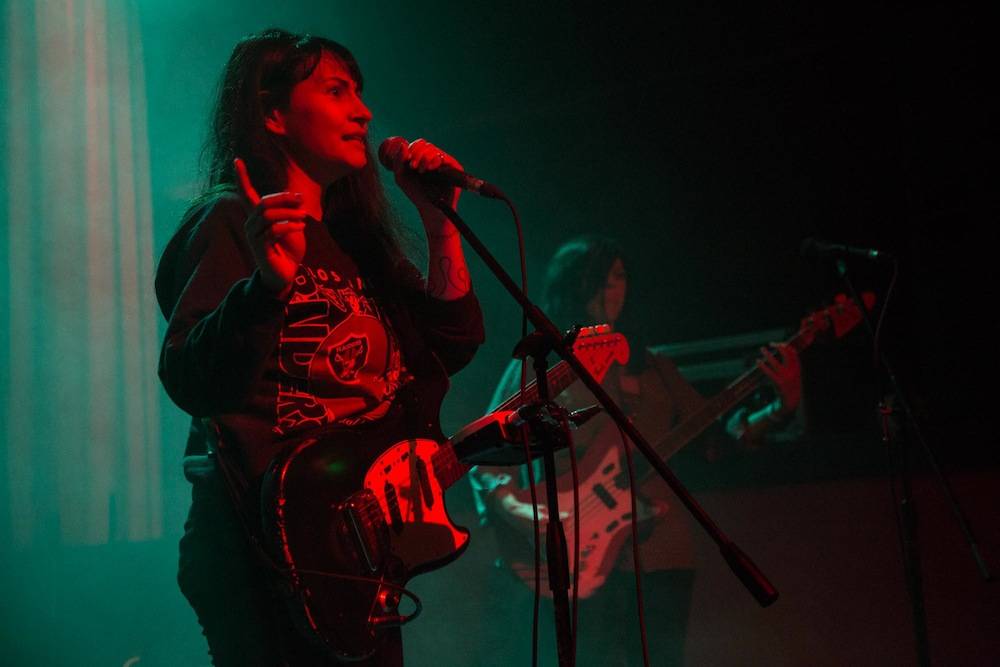 If you didn’t catch Frankie Rose‘s whirlwind 45-minute show at the Fox last week, then you may be out of luck for a while. Rose is looking to make a career change, she informed the meager audience last Friday night. A couple of fan suggestions – accountant and plumber – were received with sour expressions.

Rose didn’t disguise her disgust with the music industry either. She told the audience that she was exhausted and that being a musician wasn’t all it was cracked up to be. Early in her set she drew the audience’s attention to the two-foot barrier between the audience and the stage, which was being utilized exclusively by The Snipe News’ own photographer Kirk Chantraine, and facetiously told us that is was “reserved for the media.”

Rose not at ease onstage

In spite of her seasoned garage-rock background as an original member of Crystal Stilts and Vivian Girls, as well as helming Frankie Rose & the Outs, Rose never really seemed at ease on stage. Judging by her sarcastic and cynical comments, it was likely because she didn’t want to be there.

Those in attendance didn’t begrudge her her attitude though, and demanded an encore. A modicum of false hope was produced when Rose returned to the stage. Alas, it was only to inform us that she would love to but she had run out of material to play. In truth, she had played a set culled mostly from 2012’s Interstellar LP, interspersed with tracks like “Question/Reason” and “Street of Dreams”off last year’s Herein Wild. Whether her head was elsewhere or not, Rose’s heart was still in her music. Her signature sweet and airy vocals floated above the dark current of synth-laden atmospheric indie-rock for title track “Interstellar” and “Gospel Grace.”

The musician looked every bit as tired and disheveled as if she’d just rolled out of a van after six-hour drive from Portland, which she had. Rose and her all-girl band had played a show at the Bunk Bar the night before and would be swiftly turning around to make their way back down the coast for the last three scheduled stops on her West Coast tour.

Rose, who moved away 17 years ago, recently returned to live in her home town of Los Angeles. She showed her hometown pride by wearing a Raiders sweatshirt. Towards the end of the night she told us that we might be seeing more of her since she was no longer based on the other side of the continent in New York.

This, however, contradicted her earlier insinuation that she was taking a hiatus from music and might make another album… someday. In the meantime, we have her most recent band Beverly to tide us over. Rose and bandmate Drew Citron released their debut album Careers last July.