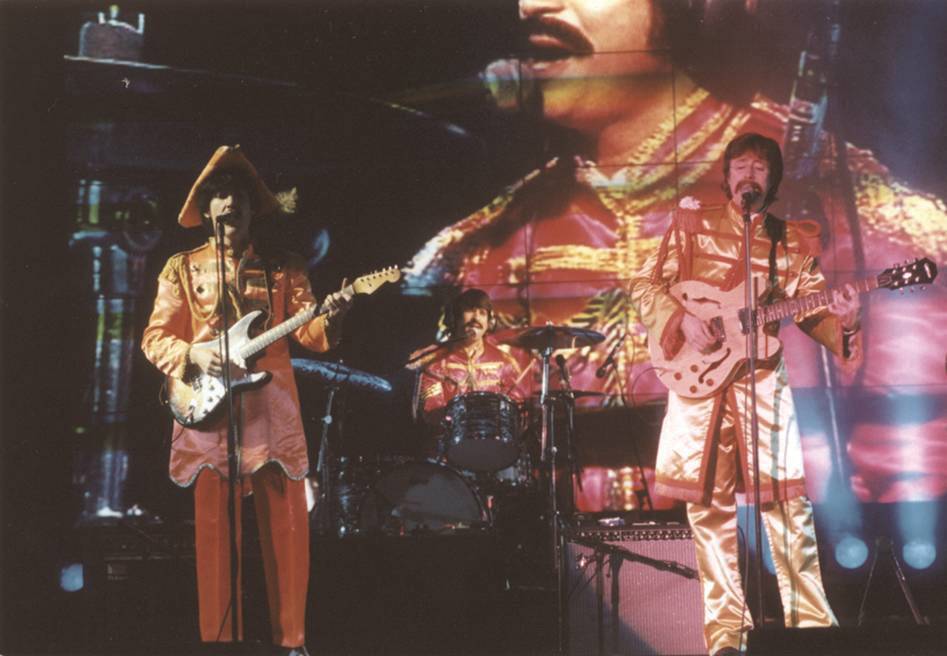 It began with an overture: a soft-stringed “A Hard Day’s Night”, a too-artful “She Loves You”, a cheesy “Lucy in the Sky with (too many) Diamonds”, and ending (of course) with “Let It Be”. Expertly and exquisitely played, the VSO had the near sold-out Orpheum crowd stoked. Then, an expectant hush fell over the crowd as the Classical History Tour took stage and Tony “Paul” Kishman addressed the faithful:

The audience cheered: grey-haired for the most part with a noticeable number of younger and more vocal fans, they were ready. Throughout the two-hour concert of over two dozen songs, one thing was clear – this was an audience eager and easy-to-please (at one point wildly applauding the mere sight of John’s round granny glasses when Jim “John” Owen made a big production about putting them on and becoming “psychedelic John”). The VSO and Classical Mystery Tour seemed genuinely pleased to please the boisterous Beatles fans.

Most Beatles songs are virtually indestructible, and will survive almost any arrangements or instrumentation. Some, like “Yesterday” and “She’s Leaving Home”, are symphonic to begin with, and these were performed exceedingly well. The songs grew richer and musically deeper with full orchestration. Visually, it was a treat to watch top-notch classical musicians dig into these classic pop tunes. Other songs seemed not to grow but to be reduced, ironically made smaller by the large orchestration – the lush strings would crush the song.

Take, for example, “Yellow Submarine”.Â If ever there were a song that did not need a symphonic treatment this is it.Â TheÂ audience greeted the song withÂ hoots and hollers and rhythmic clapping;Â by the end, though, the submarine had sunk, with only a few souls still clapping along. The pudgy and po-faced Chris “Ringo” Camilleri did not help matters. He seemed to beÂ phoning it in – from long distance.

Others who seemed to share the same phone plan sat on stage, formally dressed, still as statues, unengaged and disinterested. These folks didn’t even clap along to the exuberant “I Want to Hold Your Hand”, which set the tone at the beginning of the night, preferring instead to cast dismissive and judgmental looks at other VSO members who were, quite literally, playing along with claps and smiles.

EncoresÂ included aÂ “Hey Jude” sing-along, “Twist and Shout”, and finally, a fevered reprise of “I Want to Hold Your Hand”. This brought almost everyone to their feet and had dancers in the aisles. Some of the more restrained and stern VSO members even managed a smile. EvenÂ a few who seemed to have been nodding offÂ started clapping.