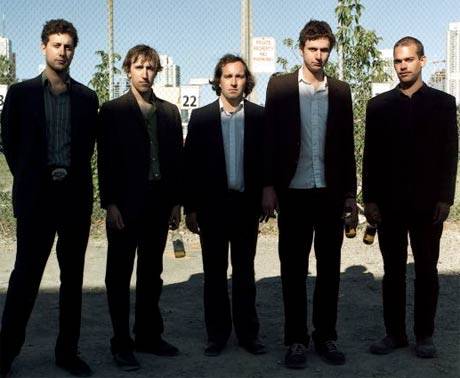 It was a joyful hand-clapping, foot-stomping sing-a-long reunion for ConstantinesÂ fans at the Commodore last Wednesday. Each song could have been a crowd favourite, judging by everyone’s jubilant reception for the quintet.

Fronted by energized singer/guitarist Bryan Webb, the band played a set that demonstrated their versatility in genre, tempo and volume level, often seamlessly shifting several times within the same song. They head-banged along to “Young Lions”, and turned down their volume so that the audience could chant along to the chorus of “Nighttime Anytime (It’s Alright)”. Every fan raised their arms in allegiance with the band for “Shine A Light.”

There was no shortage of fancy stage posing from bassist Dallas Wehrle, who showed off his skills while playing his instrument lifted over his head. Nor was energy lacking from dancing keyboardist Will Kidman. The band members, including singer/guitarist Steve Lambke and drummer Doug MacGregor, took shifts on the tambourines for “Poison.” Even a false start was laughed off by Webb. Apparently there was little to nothing that could dull the up-beat, excited mood of the audience or band members.

Formed inÂ 1999, ConstantinesÂ are currently in the midst of their reunion tour in support of the reissue of their second album, 2003’sÂ Shine A Light. The five young men were late bloomers into adulthood, according to a February entry on their website explaining the mindset leading up to their break-up in 2010. It was their time together as a band that stunted their personal growth and nurtured their adolescent spirit.

This extended youth is at least in part what drew the large crowd of young 20-to-30-something Vancouverites. In the four years since the band broke up, the fans’ hearts had grown stronger. And in the eleven years since the release of Shine A Light, the songs still held their relevancy.

For their 2014 reunion, the Guelph quintet beganÂ with the Eastern Canada summer festival circuit in June, and are now touring the West Coast. Midway through their Vancouver set,Â Webb paused to thank opening local band Ladyhawk for lending them most of their gear for the night. The Vancouver bandÂ played a solid set of straightforward, show-boating rock ‘n’ rollÂ as the four bandmates spent as much time rocking out with each other, turned away from the audience, as performing for the crowd. The Ladyhawk guys are celebrating their decade milestone as a band this year, and clearly still enjoy playing together. It was an enthusiastic but non-macho performance by singer/guitarist Duffy Driediger (also of Duffy and the Doubters), guitaristÂ Darcy Hancock,Â drummer Ryan Peters. but most of all by Sean Hawryluk. The bassist whipped his long hair, spun and scissor-kicked his way through the set.