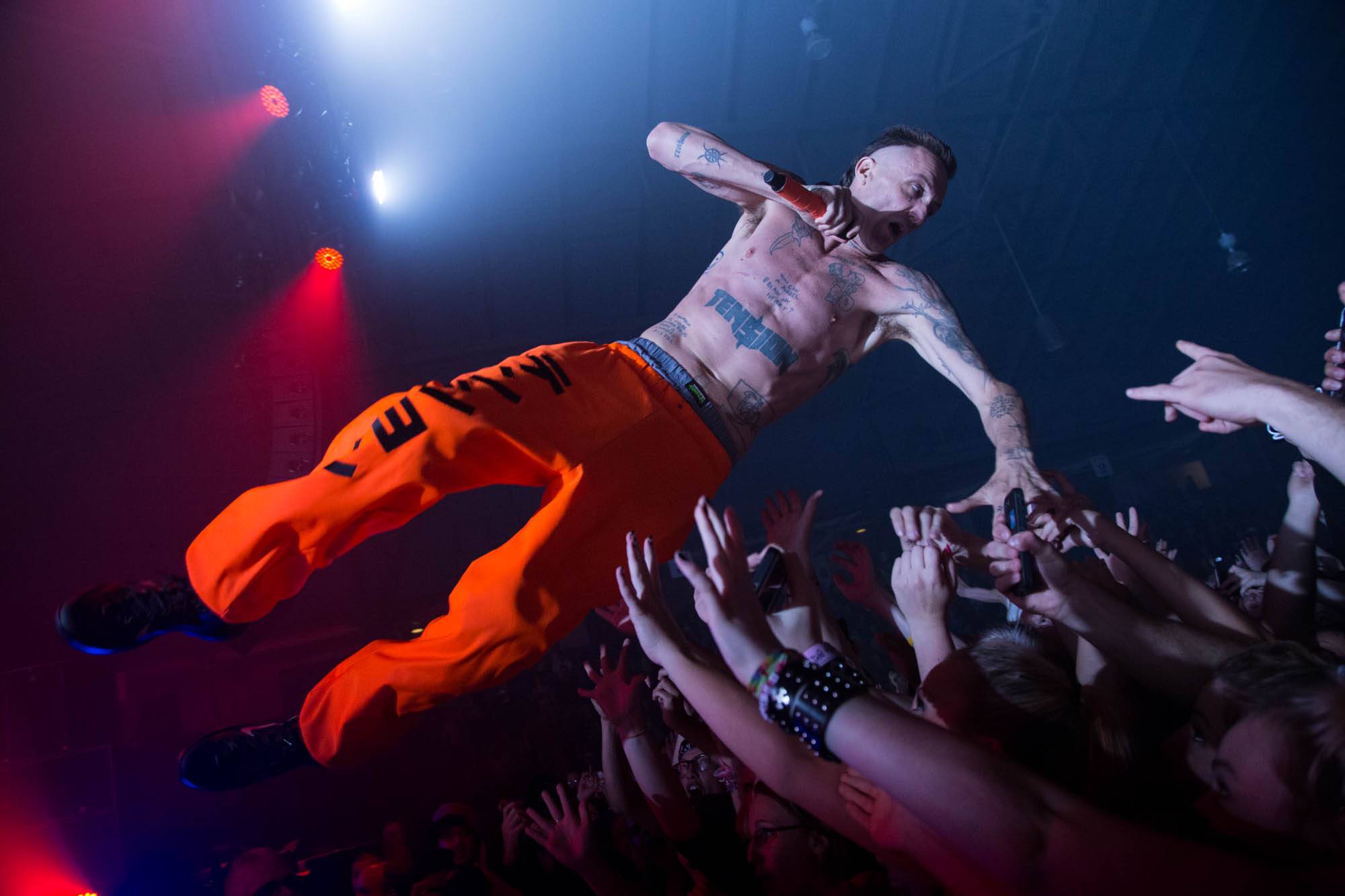 Well, that was frightening.

As someone who fancies himself a connoisseur of horror movies, I can honestly say Die Antwoord live is one of the scariest things I’ve ever seen.

To be fair, the band isn’t trying to come off as a cuddly anime-pop band, say, or anything other than some of the most frightening mother******s you’d ever come across in a South African back alley.

First, there’s Ninja, a six-foot-plus, grimacing plank of tattoos. At Tuesday night’s Vancouver show, he was dressed only in baggy shorts and attitude except for when he wore women’s underwear on his head. His foil is Yo-Landi Vi$$er, a diminutive blonde with shanks of wheat-blonde hair with a penchant black contact lenses. She has a high-pitched singing style pitched somewhere between that weird vuvuzela sound in De-Lite’s “Groove is in the Heart” and a hamster. She is like a cross between the bride of Chucky and a reject from The Road Warrior. Or perhaps they are both like something dropped in our time from a dystopian future. I don’t know. 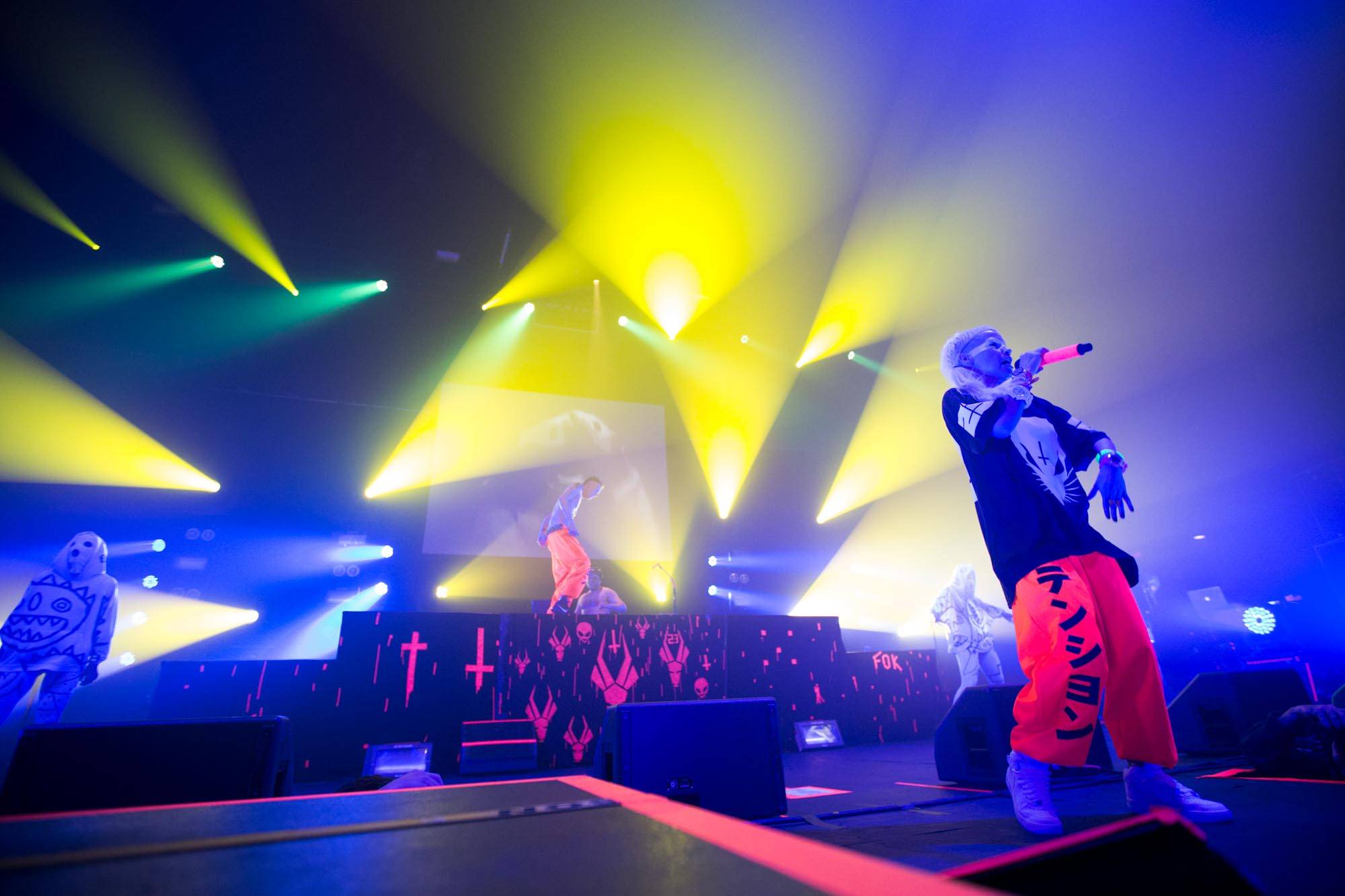 Behind them, managing a DJ booth that looks like it was decorated by Jagermeister, is the group’s resident DJ. This slab of beef fashions himself after the Batman villain Bane (you know, the guy who likes to break people’s backs over his knee). He calls himself “DJ Hi Tek.”

The music the band makes is no less scary than their appearance. On Die Antwoord’s three albums, including its latest Donker Mag, it’s a broth of EDM and hip-hop beats and sounds brewed in hell.

Live, it’s the same, only longer and louder.

Vi$$er and Ninja trade off vocals, or rather, they swear at each other and run from one side of the stage to the other like two overactive kids hopped up on crystal meth, Ecstasy and bath salts after killing their parents. Two female dancers in various styles of gimp outfits, like something out of Quentin Tarantino‘s fantasy stage show, accompanied the trio. A couple of times, Ninja crowdsurfed. Behind the group, a video screen showed images such as a black-pupiled Yo-Landi with blood dripping down her chin, and holding a rat. Another scene showed a gynaecologist holding a live, wriggling prawn that he has just supposedly removed from the privates of a Lady Gaga lookalike (a scene from the band’s infamous “Fatty Boom Boom” video.)

The lyrics don’t amount to much more than standard-issue rebellion, nihilism and misanthropy. If I had to try to figure out the setlist, it would probably look something like this:

In fact, for all Ninja’s “fuck your rules” shtick, the show had security tighter than the U.S. border. The group went on on time, and they wrapped the whole thing up in an economical 60-minutes-plus. Maybe these “rules” he’s talking about are the ones that say it’s a fashion faux pas to cover your body in tattoos of a Pillsbury Doughboy with a giant hard-on or to show Lady Gaga in a gynaecologist’s office.

Whatever the intention behind the Die Antwoord party-line, the crowd ate it up. The thousands who’d paid their $50-plus danced, waved their hands in the air and shoved their way to the stage as much as was possible. (I took to the much more civilized bleachers.) On the way out, I heard one girl complain to her friend about some other girls who were at the front. “They didn’t even look like they were enjoying it,” she said. “It was like daddy sent them out to get some culture.” Well, that’s an interesting definition of culture.

But hey – I have to admit, I kind of loved it, too. Die Antwoord has hit on a great formula for a horrific night out. Like a well-crafted fright film, a Die Antwoord concert offers a glimpse into human (or inhuman) depravity that you can easily, and safely, escape from immediately after for the safety and comfort of home. Where, hopefully, there is no Bane-shaped DJ in a gimp mask waiting.