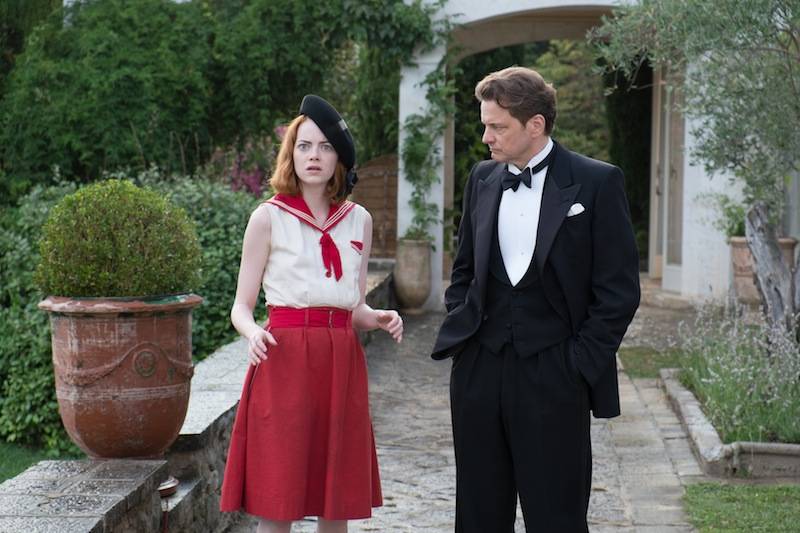 Woody AllenÂ and myself have two common infatuations: the Roaring TwentiesÂ and the occult. It would seem then that we are the ideal pairing of movie-lover/viewer and filmmaker, especiallyÂ this week’s release,Â Magic in the Moonlight.

The latest from the writer/director is set mostly in the Cote d’Azur circa 1928, andÂ centresÂ around the illusionist Wei LingÂ SooÂ (aka Stanley Crawford, played byÂ Colin Firth). His mission, as solicited by his best friend and fellow magician HowardÂ (SimonÂ McBurney) is toÂ expose the young psychic Sophie Baker (Emma Stone) as a fraud before sheÂ marries Brice (HamishÂ Linklater).

Allen has explored the theme of magic before, most recently inÂ ScoopÂ andÂ MidnightÂ In Paris.Â In the former he cast himself as a somewhat pathetic magician who through some fluke wasÂ able to communicate with a ghost in orderÂ to help catch a serial murderer. In the latter, magicÂ allowedÂ Owen WilsonÂ to escape from his bleak reality to go back in time to 1920s Paris, to meet his idols and fall in love with a young flapper.

Spoiler: inÂ Magic In The Moonlight, there is no actual, literal magic. The 1920s are relevant only as a pretty setting and means of avoiding the pesky existence of modern technologies which would surely bring the film to a hasty end.Â Instead, Allen confronts his questions about the existence of magic’s many manifestations and purposesÂ in reality.

It is established very early in the film that anyone who believes in the existence of spirits and the afterlife, or who isÂ religious (the two are one and the same, according to Allen) are fools. However, whenÂ StanleyÂ is convinced byÂ SophieÂ that she can actually receive “impressions” and communicate with the dead, he embraces the discovery with exuberant joy. It turns out thatÂ Stanley’s pessimism and cynicism are products of his disappointment in the lack of magic in the world, and that his reputation for defrauding so-called spiritualists is a missionÂ of hope,Â not malice.Â The concept of magic is offered as relief from Allen’s tiresome themes of pessimism and cynicism. Although not immediately apparent, theÂ magic is treated optimistically inÂ Magic in the MoonlightÂ – a carrot dangled just out of reach of his characters.

OnceÂ StanleyÂ has accepted the existence of magic, a switch is flipped, the barriers fall down, andÂ he is instantly transformed into a happy person (at one of its cheesier moments, Firth actually utters the “stop and smell the flowers” clichÃ© in sincerity).Â It is this magnetic change in character that unwittingly attracts Ms. Baker to him.

His change in attitude is just as easily reverted, however, when his aunt’s near-death accident leads to a breakthrough of logic and the realization that hisÂ currentÂ mission has been an elaborate prank. It is then that Firth is finally forced to acknowledge the grander existential questions, and to expound on theories of logic versus magic to his aunt VanessaÂ in what are probably the most boring and redundant scene of the entire film.

This same scene coincides withÂ Stanley’s discovery that he has fallen in love with none other than the young con-artist and co-conspirator who managed to swindle him.

It can be argued that only inÂ Allen’s filmic universe can a beautiful young woman consistently fall in love with a curmudgeon old enough to be her father – that that in itself is magical. However, the age difference betweenÂ Firth and Stone aside,Â only a completely heartless person could not be affected by the vulnerable sentimentality ofÂ Stanley, when he comes to his greatest realization of all: love is not something to be rationalized. Love is magic. Indeed, it is sad and somewhat unbelievable that this realization has come to him so late in life, and that the only thing chaining him to his awaitingÂ fiance, Olivia (Catherine McCormack), is practicality.

One infatuation that Allen and I don’t share is with Woody AllenÂ the person, or more specifically the often jarring insertion of his affectationsÂ of speechÂ onto his characters. While the cadence and dialect was stillÂ clearly there, I found itÂ surprisinglyÂ naturalÂ spewed from Firth and Stone.Â Firth channels Allen as one of his typical curmudgeonly cynics quite convincingly, and Stone has just enough quirkiness and comedicÂ experience to carry it off. Stone’s saucer eyes and sass are put to excellent useÂ in Sophie, although herÂ characterization of a witty young women is swiftlyÂ abandoned.Â As soon as it is revealed that she is not much more than a puppet forÂ bitter second-rate magicianÂ Howard,Â Baker is reduced toÂ a lovely sap and impressionable mind who was waiting for the right educated, wise man to mold her.

However, no characters suffer as much as Brice and Olivia, who are never fully humanized and seemingly disappear from existence like one of Wei LingÂ Soo’s elephants when love grips and unites Stanley and Sophie. Whether the actors are given the opportunity to add dimension to their parts or not, the casting, in my opinion, is quite impeccable.

Magic in the MoonlightÂ is a rather restrained and reflectiveÂ film compared to other Allen fareÂ – it never quite digresses or veers too wildly in any direction. It contains just the right amount ofÂ neuroticism for a Hollywood romantic comedy to make it distinctly of its creator. It is pleasing on the eyes and easy to digest, even if you aren’t the biggest Woody Allen fan. Though it definitely helps if you fancy flappers and phantoms.

Magic in the Moonlight opens Aug. 1Â in Vancouver.