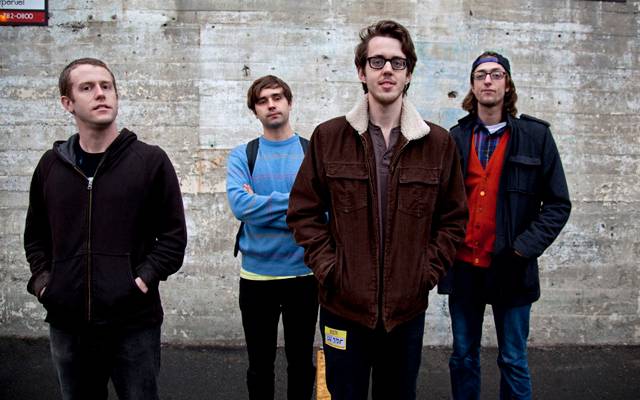 It was a melting pot of melting faces at the RickshawÂ on SaturdayÂ night. The crowd was already sizeable by the time the first band took the stage, and the people kept arriving in waves. By the show’sÂ mid-point, the dance floor had spilled onto the theatre stairs, and most of the balcony seating was still occupied.

I couldn’t remember the last time I had seen the Rickshaw so full. On aÂ visit to Vancouver last year, Torontonian noise-rock bandÂ METZÂ nearly filled the considerably smaller Biltmore Cabaret, but I was unprepared for the awesome turnout this time around. Probably the double-headlining billÂ withÂ Cloud NothingsÂ was partially accountable for their ability to fill such a large capacity venue.

OpenersÂ The WytchesÂ of Peterborough, England started the w[y]tching hour early, aroundÂ 9:30 p.m. The three young men could have been concealing warts or other questionable hideousness beneath their varying lengths of face-obscuring hair, which they thrashed incessantly. From behind his long dark locks, singer/guitaristÂ Kristian BellÂ unleashed a nasal snarl that was a handful ofÂ Billy CorganÂ and a pinch ofÂ Jack White. The similarities didn’t end there. The Wytches’ sound is a concoction of theÂ Smashing Pumpkins’Â guitar-riffing rock,Â White Stripes’ bluesy garage rawness, psychedelia and head-banging metal. Bell, along with bassistÂ Daniel RumseyÂ and drummerÂ Gianni HoneyÂ conjured up their restless youthful energy for songs off of their upcoming first full-length album,Â Annabel Dream Reader.

METZ vocalist and guitaristÂ Alex EdkinsÂ could probably out-thrash and rock harder than most teenage punks half his age. The band frontman head-banged, shook, and danced as if afflicted with a violent agitation only cured through sheer exhaustion. Edkins may have pushed his own physical barriers, but he had genuine compassion and care for the supportive audience. He checked in and offered encouragement to dance, not mosh, a few times between songs.

The final band of the night was Cleveland’s Cloud Nothings. More melodic and listenable than Metz or The Wytches, nonetheless, nothing about the noisy punk offerings off their latest,Â Here and Nowhere Else, was immediately or discernibly special.Â Singer/guitaristÂ Dylan Baldi, bassistÂ TJ DukeÂ and drummerÂ Jayson GeryczÂ were less dynamic or original than the bands leading up to them.