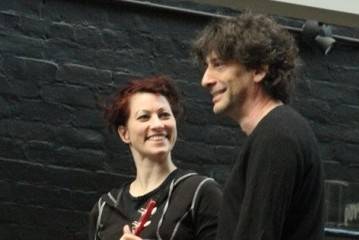 Amanda Palmer announced on her blog yesterday (March 18) that she is putting together a free event tonight (March 19) at the Vogue Theatre.

The musician hasn’t formally announced who the guests will be, but she has left several hints.

Writing at AmandaPalmer.net, she says “neil [as in Gaiman, her husband and acclaimed fantasy author], jason webley [musician], imogen heap [musician], and many others are in town for TEDÂ and of course… ninja must be ninja’d.

“TED, if you know much about it, is super fucking organized, and there’s very little realtime cross-over with the people here in TED-land and the population of Vancouver.Â let us crush the fence.”

To that end, Palmer contacted the Vogue Theatre (918 Granville Street), which offered up use of the venue for tonight. She has promised to corral a number of people in town for the conference for tonight’s FREE (she’s asking for a donation of $10-20 to go to the local food bank.

As for guests, well… on her blog, she writes “EXPECT:Â MANY WEIRD SPECIAL GUESTS. my goal was to rope in a handful of scientists and other bizarro TED-speakers… as it currently stands, i have at least one geoff berner, oneÂ bora yoon, one famous harvard professor, and one astronaut who plays guitar. THERE MAY BE BRAINS.”

She adds, “Do not expect anything well-organized.”

According to a Twitter update at @amandapalmer, there will also be belly dancers.

The Vogue holds about 1100 people, and tonight’s special event has a first-come-first-seated policy.