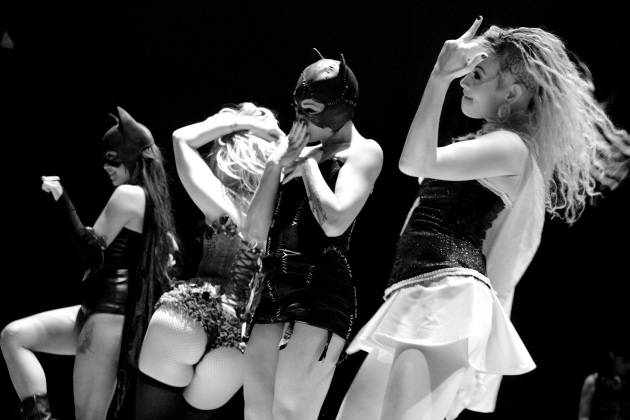 Since its founding in 2001, the SuicideGirls brand has grown to include not only its original website but also books, comics and a touring burlesque show.

In the early 2000s, the show crisscrossed North America for five years, including a stop in Vancouver. Proving itself ahead of its time,Â the show riffed on pop culture through burlesque in a way that’s since become all the rage for troops across North America.

After a six-year hiatus, a new show, SuicideGirls: Blackheart Burlesque, is reclaiming some of its own. The tour includes a Canadian leg that kicks off in Vancouver April 2 at the Rickshaw Theatre and features choreography by Manwe Sauls-Addison (Beyonce, Jennifer Lopez, Lady Gaga) and seven SuicideGirl dancers. Routines are based on pop culture totems such asÂ Kill Bill, Game of Thrones, The Big Lebowski, Planet of The Apes, Dr. Who and more. 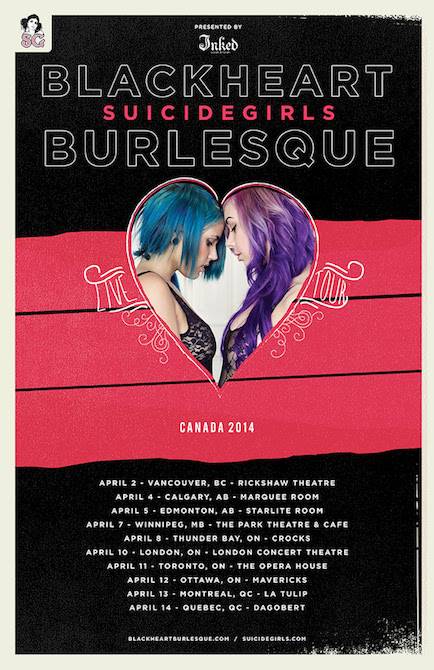 Abby Normal: Hi this is Abby from The Snipe. How are you?

Missy Suicide: I am doing excellent!

AN: Wonderful! I am just going to jump into this and ask you some questions. The first thing I have in my pocket is, did you ever see SuicideGirls spanning this long or getting so godDAMNed popular?

MS: Well, when I first envisioned it it was 2001 and there wasn’t a Facebook, Tumblr, Twitter, Instagram or even Myspace or Friendster, so the idea of social networking was sort of out there. To tell people I was going to start a site where people would put blogs and interact with one another and share their lives and thoughts and feelings AND there would be boobies!!! It was a crazy radical idea because most of the sites that had boobies on it were trying to out raunch themselves so nobody would want their face on that, but I had to sort of say, “It’ll be good! It’ll be good guys!”Â and it really resonated with people. Now we’ve got 3000 women from all over the world and every continent including Antarctica.

AN: Of those 3000 women, I was wondering how many of your original wave of models are still active or involved in your site today?

MS:Â We started out with 12 girls who were all friends of mine that I knew in Portland and that I would take pictures of. Of those 12 there’s still I think three or four that check in on a fairly regular basis. They certainly aren’t necessarily blogging every day.

MS: We call what we do “pin-up”. They are beautiful images of naked women but there is nothing graphic about them so that’s sort of where the line in the sand is.

AN: So you wouldn’t really identify your site as either of those things?

MS: Both of those terms sort of make me bristle.

AN: Fair enough. It seems to me the whole SuicideGirls subculture is based around women who are excited to take off their clothes. I was wondering how do you think your site differs from others in empowering its models?

MS: I think that the photo sets are designed to showcase how each girl feels sexiest about herself and most photos like this are going to show how the photographer frames the world. It’s kind of a different concept for the models to be so empowered to decide how she is presented. I think that’s a core difference between the photography on our site and the photography in maybe the “other” world.Â I feel like the girls are really a community. Â There are friendships that have been made.

The way our site works is that all the girls and members keep blogs on the site and they can also connect with other groups with similar interests. So, if you are interested in vegan cooking, or Libertarian politics or religion or hip-hop music or whatever it is, you can find people from around the world who share that interest and those same people also think that the Suicide Girl aesthetic is hot, so it’s kind of two touch points on commonality, so the people that you meet that share your interests are also the people you might connect with on a deeper level.

AN: You had just mentioned the SuicideGirls aesthetic and I am just wondering what do you think of the role that your site had in making that popular. Do you think it is sort of the “edgy norm” now because a lot of punk girls look up the SuicideGirls and think they are like the hottest thing in the world?Â Could you have expected that to happen?

MS: I never could have expected that to happen necessarily. I just thought that the friends and girls that I knew were the most beautiful girls in the world and thought, Why is there only two types of beautiful? There’s like the Pamela Anderson silicone enhanced blond bombshell body or there’s the waif-thin Kate Moss supermodel body and nothing else in between and what about these girls with piercings and tattoos? Their bodies are way better! They’re real! They’re beautiful! They’ve got so much to share with the world!

So that was truly the inspiration for really putting it out there.

I think that society is definitely shifting to be more accepting of more types of beauty and I think that’s awesome. I don’t know if I am necessarily solely responsible for it.

AN: Well, if you can think to yourself that maybe you had a role in it, that’s probably not a bad thing going to bed thinking about.

MS: Exactly! If I played some small part in that then I am stoked.

AN: Kind of coming out of that question – alt-porn/modeling and especially burlesque have a reputation for celebrating different body types. Are you conscious of that when you are picking new Suicide Girls or who will go on tour with you? Â Is there anything you are looking for in regards to that?

MS: On the site it’s all through member review. There’s a number of sets that go up every week to the member review and then from there we choose the first set of the day based on the ones that the members respond the most strongly to. It’s a little bit more democratic. I don’t have as much say.

But in the burlesque tour we definitely have a lot of diversity in the body types and everything. The girls are all gorgeous.

AN: Yee-haw for gorgeous girls! So, all of a sudden in Vancouver there are all these geek-themed burlesque shows. We’ve got Star WarsÂ to Game of ThronesÂ to video games. What do you make of that sort of thing? Do you think this is regional or is it happening everywhere? Also, how do you think your site can differentiate itself from those or did it sort of spawn them?

MS: We did a burlesque show back in 2002-2006 that was very different from anything out there. We did Quentin Tarantino tributes, so like “Stuck In The Middle With You” and the cop and the ear scene from Reservoir Dogs. So we were doing that back then. In the ensuing six or seven years since we last put on a tour there have been all these shows that have popped up everywhere like the Star Wars burlesque so we knew that when we put on this show again that we have to really up our game and make it incredible. There’s some really great choreography. The girls are all professionally trained dancers.

AN: So what can we expect for your upcoming tour? Â What can we tell people that they are going to see?

MS: There is going to be a ton of pop culture references because that’s sort of our wheelhouse. We have Game of Thrones, we have Star Wars, we have all of that, but we also have like Planet of the Apes and stuff that isn’t maybe being done as much – and the soundtrack is just awesome! Maybe I am biased, but the soundtrack is all modern music and there’s a diverse range. It’s all stuff you would think, “Oh yah! Â That totally works! Awesome!” And of course, just expect that the girls are all badass dancers.

AN: Well, I will have to be at the one in Vancouver!Â I just want to sneak in one more question before I let you go, and it’s this: How would you define “alternative beauty”?

MS: I think that with alternative beauty Â it just comes down to that all women are beautiful and while some women might be more palatable to everybody there’s still something to everyone.

I’ve been trying to think of this analogy, and it’s not working out very well, but here it goes. So: I understand that I’m not everybody’s cup of tea. I am not one of those big popular brands of teas. Some girls are like Earl Grey and some girls are like Darjeeling.

AN: OH MY GOD I LOVE THIS ANALOGY SO MUCH! I AM TOTALLY A GINGER ZEST!!!

MS: Yah, so for you it’s it’s like, “I’m a Ginger Zest, and while I might not be for everybody, there’s some people that would KILL for Ginger Zest tea!”

I am still working out this analogy. It hasn’t been perfected yet.