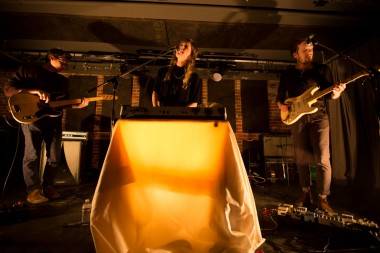 This was at least PBC’s second show here in support of their debut, last year’s Moon Tides. Expanded to a four-piece for the tour, Pure Bathing Culture’s sound took on more hues and colours than on the album. A tropical sunset backdrop, with palm trees and ocean, would not have been out of place behind the Portland-based band.

Not that there’s anything wrong with Moon Tides, which The Fader called “the summer’s prettiest album.” The record made Stereogum’s 50 Best Albums of 2013 and Gorilla Vs. Bear’s 50 Best Albums, and for good reason. The sound is smooth and sensuous, with a ’90s soft-rock sheen and some terrific songs.

On Wednesday night, though, vocalist/keyboardist Sarah Versprille belted out the tunes with a kind of soul that is barely hinted at on the controlled, pristine Moon Tides. Meanwhile, co-founder Daniel Hindman (both Versprille and Hindman were formerly in Vetiver; they started Pure Bathing Culture after moving to Portland from New York) contributed shimmering guitar lines and the drummer (Brian Wright, according to the band’s Facebook page; Zach Tillman plays bass in the live lineup) provided jazz-caliber chops to diaphanous (think a more cheerful, accessibleÂ Cocteau Twins) songs like “Pendulum” and “Dream the Dare”.

La Luz, a four-piece girl group, delivered a set of sweet’n’sour surf-rock with plenty of oomph, notwithstandingÂ technical glitches at the start of their set.Â This was the last show of the tour for the two bands, and they both seemed appreciative of each other’s talents. Everyone onstage was clearly having a blast, a feeling that extended to the half-full Owl.