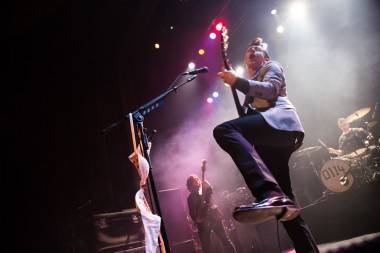 Arctic Monkeys at the Vogue Theatre Sunday night. The Sheffield, England band is on tour for their latest album, AM, released earlier this year. It’s the fifth studio album from the Alex Turner-fronted band since it formed in 2002. Vancouver blues-rock duo Pack A.D. opened the show.

The album features the songs “Why’d You Only Call Me When You’re High?” and “One for the Road”.

The Sunday night show was the first of two-sold out appearances in Vancouver (the second is Monday, Dec. 2). Reviewing the show for The Province, Stuart Derdeyn writes, “The band has hardcore fans here and the hearty screams and singalongs just took the show into that perfect-night-out realm. A late-season contender for Top 10 of the year.”