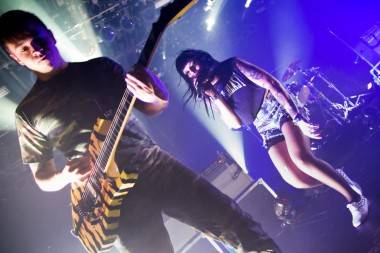 Brooklyn’s Sleigh Bells have earned all the Best New Band titles thrown at them since their 2010 debut – so the leopard-print boxing robe that lead singer Alexis Krauss appeared in at the start of Thursday night’s show was entirely appropriate. She and hardcore guitarist Derek Miller have managed to release three full albums in as many years and put on a hard-hitting performance night after night. Imagine my surprise to see that the Commodore Ballroom wasn’t filled to the rafters with rabid fans.

To the duo’s credit, they managed to lure every single soul onto the dance floor – a spirited drum-beat intro gave the audience an added boost after the more subdued, fuzzy sounds of openers Doldrums. Krauss expressed how impressed she was by the Montreal art/DIY act; it was their first night on tour but they stepped up to the plate, laid down their eclectic jams, and showed no signs of intimidation.

Sleigh Bells took reign of the house, and it was obvious that the crowd was immediately hooked. Heads banged to the hardline beat and siren sounds of “Minnie”, the band sounding larger than life with an additional drummer and guitarist. Miller was the backbone of the group, driving home dance-punk themes, like “Tell ‘em” and “Infinity Guitars”, with aggressive guitar riffs.

Krauss was a captivating force herself, throwing down hip-hop moves on every inch of the stage – and when there was no room left to cover, she leapt over the barrier to surf the crowd. The entire time, she showed insane vocal range, moving from lush, feathery crooning on the bubble-gum “Young Legends”, then blowing everyone out of the water with her bad-ass cries on “You Don’t Get Me Twice”.

Their unlikely pairing – Krauss comes from a teen-pop background and Miller was a former member of experimental punk group Poison the Well – isÂ what makes Sleigh Bells so fascinating. Drawing on clashing elements like rap-core, electro, heck even crowd chants, the duo create infectious hits that just work.

Thursday night’s display may have been one of the most overlooked shows of the year – but to the sweaty, enraptured audience, it was another shining moment in the band’s career and in contemporary noise-pop history.