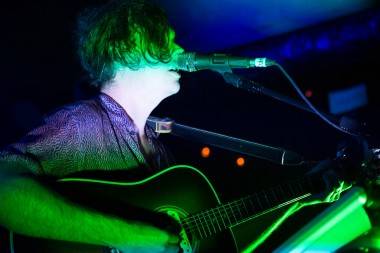 WashedÂ Out, aka Ernest Greene, at Fortune Sound Club Tuesday night, as part of his extended late summer and fall tour. The tour is in support of the latest Washed Out album, Paracosm.

“It’s a realm of leisurely melodies and keyboard chords that wash in and drift away, of calm vocal harmonies and burbling electronics, of lavishly blended acoustic and electronic instruments and echoes of reassuring pop from past eras…ParacosmÂ sounds warmer, more enveloping; precisely because it’s so much more spacious, it’s cozier.” -Â New York Times