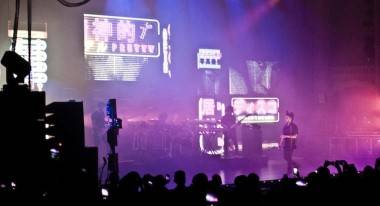 Photos – The WeekndÂ at the Orpheum Theatre, Vancouver, Sept 6 2013

The Weeknd kicked off its 2013 Kiss Land tour Friday night in Vancouver at the Orpheum Theatre. The band, aka Abel Tesfaye, has a second show at the venue tonight (Saturday).

Tesfaye first came to the public’s attention through music posted on YouTube. After releasing three mix tapes free to the public, and collaborating with Drake on his album Take Care, he was signed to Universal. Kiss Land, scheduled for release Sept 10, is his debut major label release. The first single is “Belong to the World” an comes with a suitably epic video.

Snipe photog Robyn Gerry was at the show and captured the action. Check out her pics below.