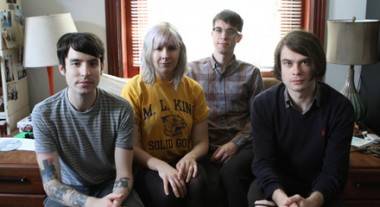 For their third album, Yeah Right, the change is exponentially greater. The songs have a shoegaze vibe,Â with droning guitar, effects pedals, and dreamy vocals. Everton has moved from drums to bass, toÂ allow her to concentrate more on singing; she also dyed her hair grunge-blonde. The band has addedÂ two new members, doubling its original size. They’ve even changed their name – they’re now knownÂ as Bleeding Rainbow, a change that was made, according to their website, because Carrie BrownsteinÂ made fun of their old name.

Apparently, it’s working. The new album has gotten plenty of attentionÂ from the indie music press, and has earned endorsements from all living members of Nirvana – KristÂ Novoselic mentioned them in a tweet, and Dave Grohl endorsed them on Marc Maron‘s podcast, WTF.

By the time Bleeding Rainbow shows up at the Media Club on Sept. 5, odds are the band will have gone throughÂ several more changes. If the pattern holds, they’ll be changes worth investigating.