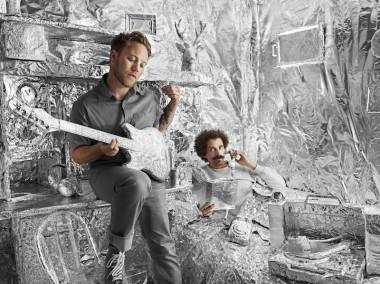 Rogue Wave has plodded through some rocky waters in the Oakland band’s 11-year career. Nightingale Floors, their fifth full-length release (their first via Vagrant Records) is a meditation and celebration of their most heartrending life experiences.

Frontman Zach Rogue and drummer Pat Spurgeon pulled together established musicians in the indie scene including Masanori Mark Christianson (The Heavenly States), Peter Pisano (Peter Wolf Crier), Jules Baenziger (Sea of Bees) and Ross Peacock (Mwahaha) to plump up their nouveau-garage synth sound on the road this summer. Fans in Vancouver can check them out at the Biltmore Cabaret on July 16. They’re now at the tail end of the tour and I put Rogue in the hot seat to figure out how the shows were going and gain a better insight into their musical tastes and influences. 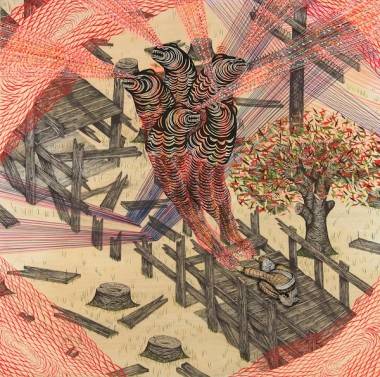 Ria Nevada: Hi Zach! Am I catching you in Oakland right now? Are you guys getting a bit of R&R from a month of non-stop touring?

Zach Rogue: Yeah, we’re taking a bit of R&R for a few days. Actually, I’ve been trying to stay home. I went to the County Fair.

RN: I guess there’s nothing like sleeping in your own bed.

ZR: Yeah, that’s pretty much my speed after being out and about you know?

RN: I was trying to dig up some old reviews or interviews with you guys from here in Vancouver but didn’t seem to find anything. Will your show on the 16th be your first time performing in BC?

ZR: No it’s not our first time but it has been a while. Honestly I think the last time we played in Vancouver was at Richard’s on Richards with Nada Surf. Gosh, I’m guessing that was four or five years ago? It’s been a long time.

RN: You guys have gone through a few personal battles and hardships in the past few years. And the new record is a beautiful expression of how you’ve bounced back from these experiences with guns blazing. Do you find yourselves feeling a little more vulnerable on stage these days? Or has this brought you closer to your audiences?

ZR: You know, I thought when we were rehearsing, we hadn’t toured in three years, I thought that I was going to be feeling that way. But honestly, since we started touring, it’s just been nothing but gratitude. I’ve felt really grateful for the audience we’ve had for such a long time and honestly we’ve played shows where there’s young people that I’ve kind of like seen them grow up (laughs). And they still want to be here every time we’re in town. I thought I was going to feel a little naked and vulnerable but honestly I’ve realized that the people who want to see us play, they’re part of us and you just feel really lucky.

RN: Just out of curiosity, what’s the deal with the brackets around the ‘a’ on the track “S(a)tan” from Nightingale Floors?

ZR: (laughs) Satan is very crafty. Let’s just leave it at that.

RN: You’re touring with Caveman this summer, another incredibly talented group of guys who also joined forces after playing in different separate bands for years. I feel like you all must just be a whole troop of kindred spirits on the road!

ZR: Yeah, we had such a good time with Caveman. I had not met them before the tour started and I just liked their band. We hit it off with them really well. We bonded big time with those guys. They’re huggers is what they are! They like to hug.

Review and photos – Caveman at the Biltmore Cabaret, April 20 2012

RN: Back in the day, you guys did a cover of Buddy Holly’s “Everyday” and fans went wild for it. If Buddy was still around, which song of yours would you like to hear him cover?

ZR: (laughs) What would I want Buddy Holly to cover? That’s a good one. Geez. Gosh, that’s a really good question. I’d like to hear Buddy Holly do “We Will Make a Song Destroy”. That would be really entertaining.

RN: Let’s get down to the dirt. Who’s the last person or band that you’d ever want to cover you guys?

ZR: Aw! Meaning who do I like the least? Wow, that’s so mean! That’s a mean question to ask!

RN: I know. I’m putting you on the spot a little bit. But maybe just think of a collaboration that wouldn’t work out.

ZR: That’s so funny. Well I think I really wouldn’t want to hear The Cranberries cover us. I don’t need yodeling on any of our songs. I think that would probably do us a disservice. That would probably not make me too happy.

RN: They would take away from your essence. I agree.

ZR: (laughs) Geez, I don’t know. I think that’s a pretty good one. Oh wait, no no no no no, let me think. No, I think that the sillier the band actually the better. So yeah, I’ll stick with The Cranberries. I think that would not be good for us.

RN: Thanks for talking to me on your downtime Zach! Hope to catch you in Vancouver!

ZR: Well thank you. You have a good rest of your day.