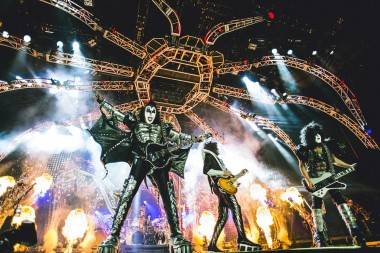 – text and photos by Tom Nugent

KISS kicked off its Monster Tour Saturday night at Rogers Arena in Vancouver. Here’s what photographer Tom Nugent had to say about what he saw:Â

I didn’t grow up on KISS. I didn’t even really know a lot of their songs, aside from the huge hit singles that still play on classic rock radio daily. Those singles never really grabbed me in a way that warranted diving further into their catalogue. And when Gene Simmons branched out into reality television and overall public ridiculousness – well it contributed to a further loss of interest on my part.

I was still excited to see the show, though. I haven’t been to an arena-scale concert in ages and, aside from the expected pyrotechnics, huge platform shoes and face-paint, I was walking in there blind.

I only got to stay for the first two songs to take photos (“Psycho Circus”Â and “Shout it Out Loud”), but within that short period of time I had an uncontrollable smile from ear to ear the moment explosions were set off and the stage curtain dropped to reveal Simmons and bandmate Paul Stanley being lowered onto the stage on top of a gigantic metal spider that was shooting smoke from underneath its steel abdomen.

The following 10 minutes was non-stop rock arena excessiveness. Back-to-back explosions and fire. Constant action figure posing at the front of the stage. And the most surprising thing of all; a really energetic stage presence.Â  If these guys weren’t world-famous and I happened to catch their show at a small bar playing as well as they did tonight I would have been astonished to find out they’re in their 60s.Â  It was ridiculous.

KISS know what they’re doing, and now I can see how they’ve turned their band into a gigantic NASCAR-like franchise. Even before the show, there were ads on a jumbo-tron for theirÂ KISS Kruise, where KISS fans can go on a cruise with the band, hang out, get drunk, and I can only imagine, discuss things like who’s seen KISS in concert the most times, compare KISS tattoos and be applauded for wearing facepaint for an entire week.

Even though the whole thing is hilarious and absurd, there’s a deeply rooted part of this whole KISS phenomenon that’s simply amazing and endearing. The fact is, there’s an international love for this group and what they do; and the band gives back to those loyal fans in their own way. I mean, they started this group 40 years ago and at some point their diehard fans got just as over-the-top as their show. One just keeps pushing the other. Their whole act is a spectacle, but that spectacle is so excessive that you can’t help but get caught up in it.

One response to “KISS Monster Tour at Rogers Arena (photos)”