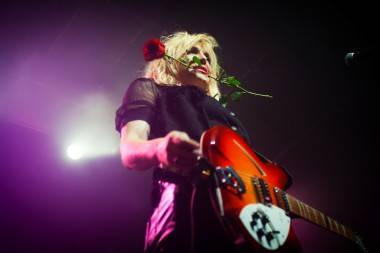 Review and photos–Courtney Love at the Commodore Ballroom, Vancouver, July 22 2013

– text and photos by Jess Desaulniers-Lea

Before the headliner even spoke or played a chord, the crowd had the floor of the Commodore vibrating; they were the most loyal audience I’ve ever seen at a concert in Vancouver. Being that most of them, like myself, may not have ever seen Courtney live, or may not have seen her live for several years, the show was more of a pilgrimage than just a good time and a drink. There was a sense that most of us would have traveled to the most obscure venue to see Love live.

Despite the media attention, her history of addiction and/or current trials, Love was in the here and now, proving that this tour is not a “comeback” as mainstream media would categorize it, but a continuation of her rock ‘n’ roll career. It would appear she has no intention of stopping.

Love and her band (which varied between three and five pieces) opened with “Gutless” off Live Through This and followed with many other songs from the classic 1994 Hole album: “Jennifers Body”, “Violet”, “Miss World,” “Doll Parts” and “Asking For it”. In the latter,  she emphasized the word “live” in the lyric of the song, singing it in repetition as if to reiterate different meanings of the word.

The hour-plus set also included favourites from Celebrity Skin such as “Malibu,” “Dying” and a haunting version of “Northern Star” performed with just her guitarist. Earlier, Love also dropped a version of Fleetwood Mac’s “Gold Dust Woman” into the set.

Despite her teleprompter, which we couldn’t see, Love’s voice was as raw and visceral as I’d hoped, which is surprising considering the longevity of a voice can be short playing punk, grunge and rock music that requires you to spend decades pushing your voice to its limitations.

For her encore she came dressed in a Roaring Twenties crimson dress. At one point she threw the red roses out into the audience, but not without first asking us “who’s been the biggest bitch today” and throwing a rose to that girl first. (Editor’s note: when someone else caught it, Love said, “That wasn’t meant for you. Oh well, watch out for karma.”)

Love is currently touring her first art exhibition which debuted in New London, Connecticut and is set to release a new record which is tentatively titled Died Blonde this winter.