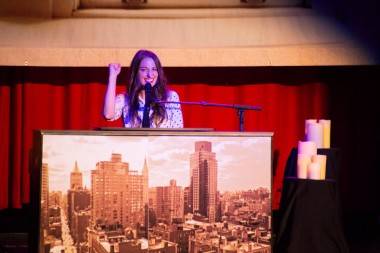 SaraÂ Bareilles at the Rio Theatre in Vancouver on a solo acoustic tour for forthcoming album. “Brave”, a single from the album, was released April 23. The new record is the third fromÂ the multi-platinum-selling singer-songwriter, who first achieved mainstream success in 2007 with her hit “Love Song” from her debut album Little Voice.

Since then he Eureka, CA native has sold over one million copies of her debut album. Kaleidoscope Heart, her second album, Â  was released in September of 2010 and debuted at #1 on the Billboard top 200 chart. TheÂ New York Times,Â Wall Street Journal, People and Los Angeles Time praised the record, which yielded the hit “King of Anything”.

Her other activities include joining the judge’s panel on the hit NBC show The Sing-Off in 2011 and, in early 2012, releasing a documentary. A Trace of the Sun: Volunteering in Japan chronicled her trip to Japan where she joined All Hands Volunteer efforts in the city of Ofunato after the 2011 earthquake and subsequentÂ  tsunami. An EP produced Â by fellow Sing-Off judge Ben Folds followed.

In the tour press release, Bareilles is quoted as saying about her forthcoming album (and her life leading up to it): “I have never felt more open and more raw in my entire life.Â  2012 was a year of deconstruction for me personally. I have been confronting some of my greatest fears in the last handful of months and have been amazed at how empowered I can feel when I muster up the courage to turn and growl back at those monsters under the bed. The songs on this album are a true reflection of everything I’ve come to experience in recent months and I’m going to celebrate that with the next most terrifying thing I can do…go back on the road…totally alone.Â  Just me. And my piano. And maybe a guitar. And some whiskey. And some jokes.Â And my songs.Â  I’m excited to share this next stage of my career with each and every one of my fans.”