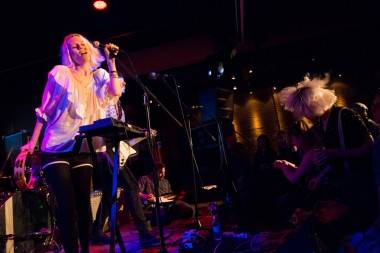 The New York band Â is on tour for their albumÂ True HallucinationsÂ on Other Music Recording Co. They were picked as one of SPIN’s “Best New Artists” recently and the record has been receiving rave reviews.

The group began as a home recording project of Brian Harding (ex-Hymns) and Amalie Bruun (ex-Minks) and is now a five-piece rock band.

From the press release: “Recorded by John Siket (Blonde Redhead, Yo La Tengo, Sonic Youth),Â True HallucinationsÂ demonstrates a variety of vintage British and New Zealand influences mixed with a healthy dose of Velvets jangle, and power-pop harmonies.” The video for the song “Ken” is said to beÂ “an homage to the classic Replacements anti-video for ‘Bastards of Young’.”