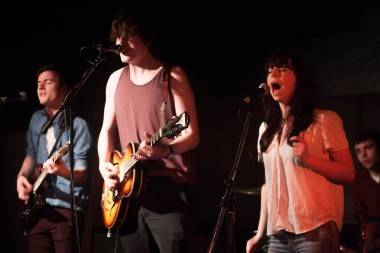 The latest buzz band in the ever-growing anthem-folk-rock scene is Little Green Cars. The talented youngsters (all under the age of 21) have been blowing up since their North American tour kicked off at SXSW in March.Â  Since then, their momentum has lead the Irish quintet to sell out shows in Boston, New York, Toronto, Columbus, Chicago and Minneapolis. Although Sunday night’s Media Club show wasn’t quite sold-out, there was a enough of an excitable crowd to indicate that the hype is spreading quickly.

Lead vocalist (and guitarist)Â Stevie ApplebyÂ held the room in rapture as he launched the set with a stirring a capella number. The great distinction between Little Green Cars and current bands in the same scene is that the entire band can sing. Beautifully. Their harmonies are powerful, which is largely due to Faye O’Rourke,Â who generates booming, quavering notes that miraculously emerge from a small and delicate frame. 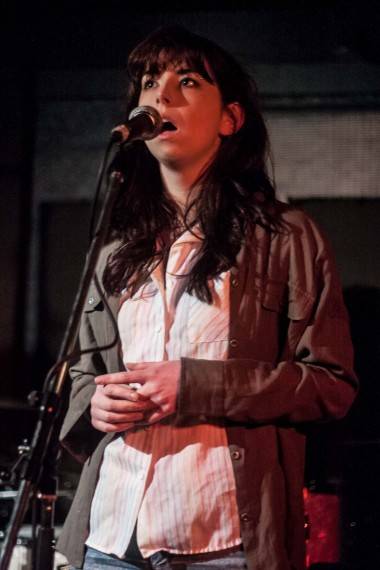 The louder, instrument-heavy songs went down a treat too. Despite a majority of the audience unfamiliar with the lyrics of the big numbers, “Big Red Dragon”, “The Kitchen Floor” and their hit “John Wayne” had the crowd dancing and enthusiastically head-bobbing.

However, keeping that vibe going between songs proved difficult for Appleby, who has yet to master easy and casual conversation with his audience. Admitting there’s an awkward silence doesn’t make it any less awkward but it is forgivable; his musical abilities more than compensate.

During the mid-way point Appleby read an ongoing poem from his phone describing their North American tour to date from fisticuffs in Atlanta to beer pong and napping in a laundromat in New York. The poem concluded in announcing the Vancouver show as a very special show marking the 21st birthday of O’Rourke. And with that, an very embarrassed O’Rourke was subjected to “Happy Birthday” from the probably tipsy crowd.

Their 45-minute set was brief but enough. It’s clear to see that this band is gaining popularity fast and will no doubt go on to bigger, better, and longer performances. Signed toÂ Glassnote RecordsÂ (Mumford & Sons, The Temper Trap, Phoenix, Two Door Cinema Club) and having just released (on April 4) their debut full-length Absolute Zero, it’ll be interesting to see where they are a year from now.