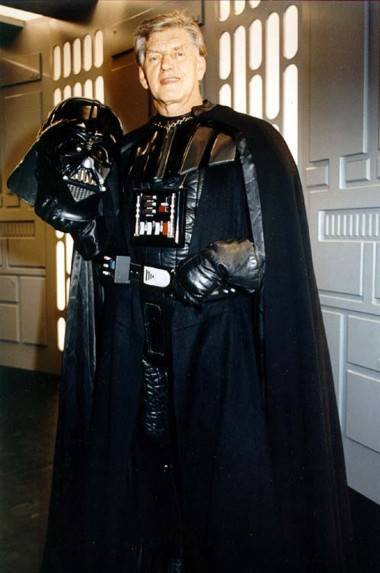 David Prowse will be at Fan Expo Vancouver.

No matter when you were born, it’s impossible to forget the first time you see Darth Vader, as the Sith lord cuts a malefic swath through the hiss of the blast doors in the opening scenes of Star Wars Episode IV: A New Hope.

Clad in black, fully a head-and-a-half taller than everyone else in the scene, breath like an industrial steam press, fairly dripping with black-knight menace: Vader’s become, certainly, the most iconic movie villain of the latter twentieth century, if not in the entire history of film. Much of that menace is owed to the hulking prowess of actor David Prowse, the man behind the black mask in the best three Star Wars films.

Prowse is coming to Vancouver as headline guest at this year’s Fan Expo, Vancouver’s version of Comicon. Taking place at the Convention Centre April 20Â and 21, this year’s event promises to be epic, with guests such as Marvel Comics’ Stan Lee, The Walking Dead‘sÂ Michael Rooker and Â Norman Reedus, Star Trek‘s original Lieutenant UhuruÂ Nichelle Nichols, and makeup/special effects artist Tom Savini. There are also attractins like cosplay competitions, celebrity autograph and photo sessions, and a massive marketplace of all things comic-related and otherwise. (For tickets visitÂ http://www.fanexpovancouver.com/tickets.)

Prowse was gracious enough to take some time to discuss his work on Star Wars, his start in the business, working with the legendary Stanley Kubrick and much more. 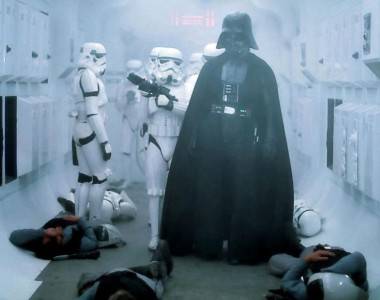 Kyle Harcott: How often do you get booked into these fan conventions, and what’s your favorite part of attending them as a guest?

David Prowse: There are twenty-nine conventions on my calendar this year, all over the world. I love meeting the fans. I get a fantastic amount of acclaim from them. They’re all very interested to know about me as Dave Prowse, far more than they are about Darth Vader.

KH: You started out young as a champion bodybuilder. How did you made the leap into acting?

DP:Â I started bodybuilding when I was fifteen. At twenty-five, I was invited to enter the Mr. Universe contest. I was six-foot-seven and knocking on about two hundred forty pounds – the biggest fella there. But the chief judge told me, “You’ll never, ever win the Mr. Universe contest. Nothing to do with your physique – it’s just, you’ve got ugly feet, and the judges will nitpick that.” So I thought, “If this is what bodybuilding is all about, I’m going to pack it in.” There was no point in staying amateur, so I turned professional.

Shortly after turning pro, I took a job as sales manager for a magazine which also sold training equipment and supplements. One of the places I used to call on was a gym with a stunt agency attached to it. The guys there asked me if I’d be interested in any work in show business. They told me, “We think you could find a good niche in show business. We run this stunt agency called ‘Tough Guys’ and we’re always getting casting calls for big men. You’re six-foot-seven, near 280 pounds – and on top of all that you’re reasonably good looking!” Most of their guys were boxers and wrestlers, with all manner of squashed noses, or cauliflower ears.

KH: What are your fondest memories of working with Stanley Kubrick on A Clockwork Orange?

DP:Â Working with Stanley Kubrick was one of the great experiences of my life [laughs]. When I got the part, people said to me, “Oh, you’re going to work with Kubrick? He’s a miserable sod, and a thug to work for.”

The first scene we shot, I had to carry Malcolm McDowell down the stairs, and we shot it again and again. Stanley was known for “never be satisfied with one take, if ten will do”. Later on, we got to a scene where Stanley told me “Right. You’re going to carry Patrick Magee down that set of stairs, in his wheelchair.” To which I replied, “Whoa, hang on a minute, Stanley – your name’s not exactly ‘One-take Kubrick’, is it?” And the whole set hushed, like, “Oh God – now he’s done it.” I thought, Well, that’s it – I’m either gonna get the sack, or everything’s gonna be okay. Stanley turned around to me, smiled, and said “Dave, we’ll shoot it as quickly as we can.” And he got it in about four or five takes. From that point on, I had a fantastic association with him! 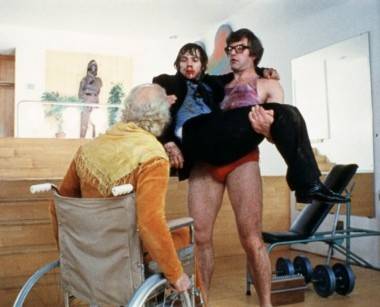 KH: Getting back to Star Wars, much has been made lately about Disney’s purchase of the franchise from Lucas. What are your feelings about this?

DP: I think it’ll be interesting to see what Disney does with the franchise; I have a feeling that the first thing they’ll come up with is a Star Wars theme park.

KH: After a legacy of sharing such an infamous character, how well do you know James Earl JonesÂ [who does Vader’s voice]?

DP:Â After thirty-odd years, I finally got to meet him in England last year. Lovely man, very appreciative of everything I had done [with Vader], and of course I was mutually appreciative of everything he had done with the character. He did a marvelous job of the voice. I still think I could have done it equally as well, mind you! I would have liked to have had a stab at it myself. But James did a lovely job of it, and the voice part couldn’t have gone to a better guy.

KH: It’s picked away at me all these long years, so I have to ask you: why on earth did Sebastian Shaw wind up being the face of Darth Vader for the unmasking scene in Return of the Jedi?

DP:Â [Laughs] Sebastian Shaw was a very good friend of Sir Alec Guinness. He’d been out of work for ages at the time. So he asked Alec if there was any possibility of getting a part in the upcoming Star Wars film. Alec spoke to George to see if there was anything in the film for him. And then, without even telling me, they gave Shaw the part of the dying Darth Vader. I would have liked to have been the person unmasked in the scene.

KH: Were you able to keep any of the original costume you were outfitted in?

DP: When we were shooting, the costumers couldn’t get any gloves or boots to fit me – nor the codpiece. So I had to personally supply my own gloves, boots, and protector. Those three things I supplied for the Darth Vader costume, and never, ever saw them again.

That said, recently a company in Orlando presented me with their replica version of the mask, helmet, and breastplate, and it’s the most fantastic piece of Darth Vader memorabilia I’ve ever seen; it makes a very nice piece to display in my office. My wife wants as little to do with Star Wars in the house as possible, so I keep it all in the office. [laughs]

KH: The image of Darth Vader has become one of the most recognizable of the latter 20th Century, certainly on par with (at least) Mickey Mouse. As the human embodiment of that image, how do you feel about the overwhelming cultural phenomenon of Darth Vader?

DP: Here I am- just some down-to-earth guy living in London who suddenly became this iconic character. Revered by millions – and everywhere I want to go they all want to talk about Vader. It’s been incredible. I still can’t get over it. I’m just ordinary Dave Prowse, weightlifter, bodybuilder. [laughs]

To find out more about David Prowse, visit his website.