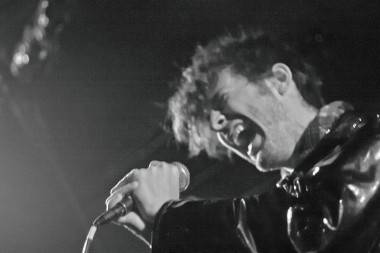 Former Spiral Beach member Airick Woodhead‘s new project Doldrums is getting the kind of buzz his previous band never quite managed to generate. The Toronto-based group has been singled out by the Guardian, Pitchfork and NME, amongst others. NME’s Rhian Daly writes, “Pulsating with a ferocious sense of adventure and imagination, Doldrums’ music is chaotic in the most fun and frenzied way possible.” The group’s full-length debut, Lesser Evil, was released in February.

Photos and review – Spiral Beach at the Biltmore Cabaret, Oct 1 2009

Blue Hawaii was one of two openers (the other was Sean Nicholas Savage). Blue Hawaii is normally a duo but for some reason only Alexander Cowan performed.