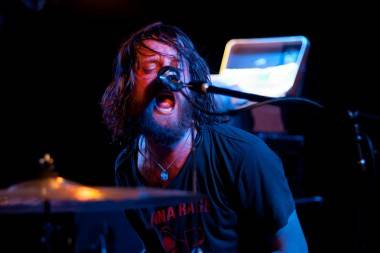 Review and photos–Two Gallants at the Biltmore Cabaret, Vancouver, Jan 17 2013

Despite some minor complications – their support band almost being detained at the border and an over-indulgence in vodka and Red Bull impairing their nimble fingers – the San Francisco folk rock duo, Two Gallants, were a force to be reckoned with Thursday night at the Biltmore Cabaret.

The sincerity of the lyrics delivered by Adam Stephens set men and women swooning. Clearly frustrated with hisÂ  impaired hands, Adam at one stage uttered an apology to the audience: “Sorry I fucked that one up.” But, the man could do no wrong. ‘I love you Adam’ screamed a man behind me. ‘You’re awesome’ screamed another man in the crowd. Any musical mistakes or sound issues were instantly forgiven in a haze of bromance.

Delivering songs from their recent album The Bloom And The Bright with a distinctive passion and ferocity, the bearded, sweat-drenched pair had the crowd enthralled from beginning to end. Although just two guys, they have the presence and the sound of a much larger band. Two-piece acts such as the Black Keys and Matt and Kim may fill larger venues for the moment but based on the crowd’s reaction Thursday night, Two Gallants may be on the same trajectory … that is if they don’t wait another five years to release their next album.

The support band was also well-received. Future Twin, a fuzzy four-piece from San Francisco fronted by singer Jean Jeanie, has a unique sound of their own – less raw and more jangly than the headliners’. Psychedelic-punk-synth-pop, perhaps, with simple, sunny lyrics as opposed to Two Gallants’ Bible references. Together, the two bands represented a kind of yin-yang of San Francisco talent. . 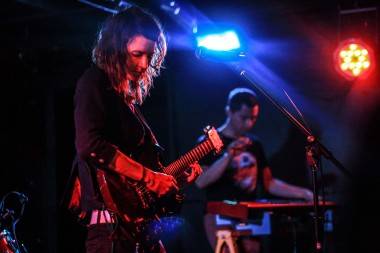