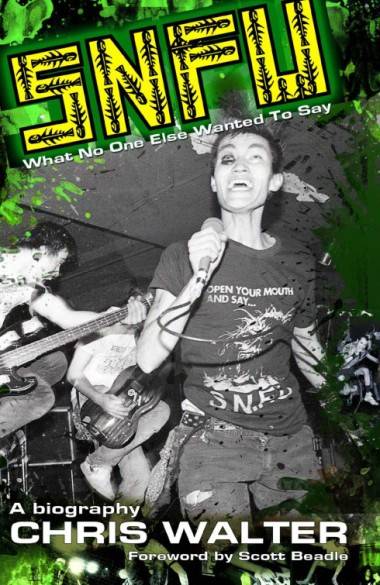 Book review–SNFU biography What No One Else Wanted to Say

In a year that saw biographies of or autobiographies fromÂ Pete Townsend,Â Bruce Springsteen, and yes, evenÂ Cyndi Lauper, the best music book of 2012 might beÂ Chris Walter‘sÂ scorchingÂ SNFUÂ biographyÂ What No One Else Wanted to Say.

The Vancouver writer tells the Canadian punk band’s story with interviews not just with the members but with roadies, crew members, management and record label reps. What could have been a vague recollection of tour dates and stories takes specific shape as the band emerges from Edmonton’s skate punk scene to findÂ international acclaim. Yet, despite establishing a legendary live show and selling a couple hundred thousand records, SNFU never achieves the popularity of some of its punk contemporaries.

Vocalist Ken “Chi Pig” Chinn‘s decline during the band’s later years is thoroughly noted.Â What No One Else Wanted to SayÂ offers some insight into the undiagnosed schizophrenia, drug abuse, and self-sabotage that combine to bring him to the point where,Â with doormen mistaking him for a derelict,Â he is denied entry to the same clubs he once headlined. 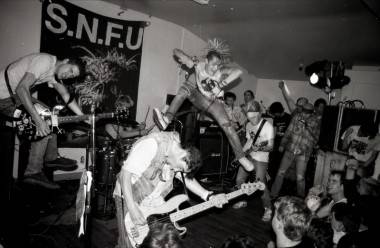 But Chi Pig is not the only one in pain here. Guitarist Marc Belke, feeling that he’s performed with SNFU so long he’s unable to do anything else, takes years to decide to step away from the band. He’s left to wrestle with seeing his life’s work continue on without him.Â Perhaps, to paraphrase Douglas MacArthur, old punk rock soldiers never die, they just fade away.

Perhaps Belke’s greatest gift to his old bandmate and singer is not their shared legacy of music, but to his eventual decision to let Chinn carry on using the band name. While Belke invents a new life for himself, SNFU may now be the only thing Chinn has left that might pull him out of the situation he finds himself in.

As the line-up changes, Walter makes no judgement on any era of the band being more legitimate or important than another. For as long as Chi is alive SNFU will appear to continue inÂ some fashion. The reader can judge for himself when the best years of the band were or whether the best is yet to come.

For longtime SNFU fans, this is the book they’ve been waiting for. For a newcomer, it serves as an introduction to a hard-working Canadian punk rock institution that never got the broader attention it deserved. And for any musician putting his case in the back of the van for the first time, it’s required reading.