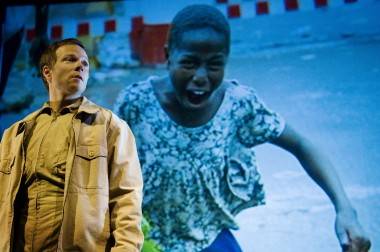 Photog: An Imaginary Look at the Uncompromising Life of Thomas SmithÂ is an unusual mix of fact and fiction.

A multidisciplinary, one-man performance piece fromÂ Boca del Lupo, the PuSh Festival selectionÂ draws from the real life experiences of four conflict photographersÂ to tell the story of the fictional title character. Set in the Smith’s New York apartment, the story begins with the photographer, played by Jay Dodge Â facing an eviction notice after returning from an assignment. As he packs up his belongings he reflects on all that he has witnessed in Iraq, Haiti, The Ivory Coast, Monrovia, Liberia, and Afghanistan.

Picking up his fragmented archive, he struggles to address the significance of his work and the seemingly insignificant effect images of war have on the masses. He expresses his passion for photography to aid the viewer in working against manufactured emotion, to feel something raw and real. But as he realizes the perverse passivity of the public to the wars abroad he is left feeling frustrated and disillusioned. “What’s it all for?” he asks. “A picture?”

It’s not often that we hear the story of a photographer’s war experiences. These range from simple physical survival, like staying vigilant while taking cover-worthy shots, to the psychological conflicts. Do you photograph a man dying in the hopes of sharing his struggle with the world or do you let him draw his last breath in solitude? 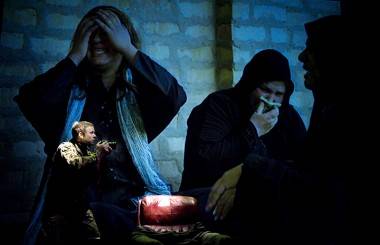 While Dodge’s long pauses and distant stares begin to grate after a while, the innovative animation, video mapping, and live video feed on the ever-changing background is, at times, mesmerizing. The added live rigging of acrobatics is enthrallingÂ  too – watching Dodge simulate being thrown from the impact of falling mortar is a sure way of grabbing the audience’s attention.
Throughout the performanceÂ a number of conflict images are displayed on the screen behind the actor but surprisingly, given the vivid descriptions of the atrocities the photographer witnessed, the majority of the images lack blood and gore. Instead, the audience is presented with stirring emotional portraits (such as an 80-year-old woman standing outside the remaining rubble of her home) or images of smiling child soldiers, laden with guns. In choosing to display such imageryÂ PhotogÂ avoids using shock factor as its selling point. It’s not about being sensationalist to get its point across while I’m sure that would have been far easier to do.A concept that just barely rises to the surface in this show is the possibility that conflict photography may be be a calling card for those attracted to high-risk situations. The concept of danger-junkies is just briefly addressed: Dodge’s character reflects momentarily on the adrenaline that is felt when working outside the wire (fighting zone). According to the photographer experiencing such adrenaline day after day begins to be a way of life and after assignment, returning to hisÂ normalÂ life can be related to coming down from an addictive substance. Sometimes he would wish to be back at war rather than dealing with the banality of football games and family excursions.For this reviewer (and photographer), the true success ofÂ PhotogÂ lies not in its presentation but its content. The photographers (danger-junkies or not) who risk their lives to bring us images, many of which probably get left on the cutting room floor because they’reÂ tooÂ graphic, deserve recognition.

PhotogÂ is dedicated to photographerÂ Tim Hetherington, an important contributor to the performance who was tragically killed in April of 2011 while covering the conflict in Libya. The show runs from now untilÂ Jan 26Â at Studio T, Goldcorp Centre for the Arts, 149 West Hastings Street. For more info clickÂ here.