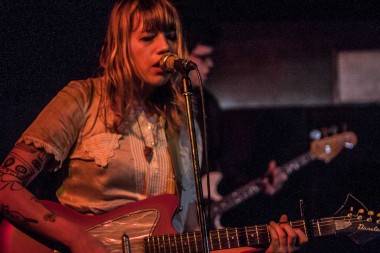 The band is a side-project of Ramone and Kevin Morby, along with drummer Justin Sullivan and bassist Brian Schleyer.

After their first full length album on Shrimper Records, a demos EP on New Images, and scores of singles on U.S. and international record labels, TheÂ Babies’ second albumÂ Our House On The HillÂ is out now on Woodsist Records.

While the band was originally conceived as a side-project, 2011 saw the project grow into a full-time affair. The band spent much of the year touring the U.S. and abroad, all the while writing new material, both in their home of Brooklyn and during a two-month sojourn in Los Angeles.

In February 2012, the band swapped their usual environs of Brooklyn’s Rear House recording studio and spent two weeks in Los Angeles working with producer Rob Barbato (Darker My Love, The Fall, Cass McCombs). The result,Â Our House On The Hill, features organ, piano, saxophone and even strings playing a supporting role.

More photos of The Babies at the Media Club, Vancouver: